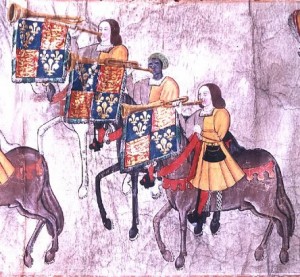 With October comes Black History Month, and as ever a number of Shakespeare-related events are taking place. While it was once thought that Shakespeare might have seen Africans only very occasionally, in recent years close study of documentary evidence has revealed that this was not the case. Miranda Kaufmann is giving a series of lectures on the history of Africans in Early Modern Britain: on 14 October she’s speaking at Eastbury Manor House in Barking, and will explore the lives of some of them including John Blanke, Henry VIII’s black trumpeter and Mary Phyllis the Moroccan basket-weaver’s daughter.  There is a link here to the story about John Blanke on the National Archives website.

On 21 October Dr Kaufmann will be talking part in a discussion at Manchester Metropolitan University with Professor Alan Rice and Marcia X on Black History Month. She’ll be offering a historical perspective to the issue of Africans in Tudor and Stuart Britain. Outside of the month itself she’ll be taking part in the Len Garrison Memorial Lecture at the Institute of Historical Research in London on 12 November. She will be helping to fill the gaps in Black British History with David Olusoga, producer and presenter of the BBC series Forgotten Slave Owners and historian and writer Marika Sherwood.

In this article from Tudor Society’s website, Conor Byrne notes that the study of black people in Tudor Britain has become a popular subject in its own right. “The Tudor period was significant for black settlement in England. Katherine of Aragon arrived at Plymouth in October 1501 with a multinational entourage that included Moors, Muslims and Jews. The Iberian Moor Catalina de Cardones was one member of Katherine’s entourage, and served her for twenty-six years as Lady of the Bedchamber. She eventually married ‘Hace Ballestas’, a crossbowman who was also of Moorish origin”.

One of the comments to his article suggests that “the prevalence of people of color in Western Europe was far greater than most people, including historians, are aware of.”. Historian Catherine Fletcher notes that in Italy, “we think Alessandro’s (de’ Medici) mother – a servant in the Medici household – was mixed-race, of African descent. People often assume early modern Europe was all-white but that’s a long way from the truth.” 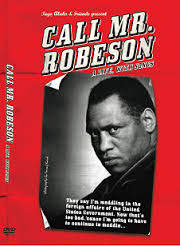 As well as lectures, there are also a few performances to enjoy: Tayo Aluko’s play Call Mr Robeson continues to win over enthusiastic audiences. The play gives an account of Paul Robeson’s remarkable life as an actor, singer and political activist. Robeson performed as Othello as a young man to Peggy Ashcroft’s Desdemona and then, in 1959, in Stratford-upon-Avon. Performed by Nigerian-born Aluko with piano accompaniment by Phil Blandford, it features famous songs including Ol’ Man River. It’s been staged at New York’s Carnegie Hall, in the West End and was recently performed in seventeen venues in Australia and New Zealand. It’s currently on a UK tour before revisiting North America. You can catch it during October in Newcastle-upon-Tyne, Leeds, Hounslow, Swindon, Bristol, Barnard Castle and London.

Another great black actor who played many of Shakespeare’s roles including King Lear as well as the more obvious Othello and Aaron was Ira Aldridge, and there is a full profile of him on the Black History Month site. 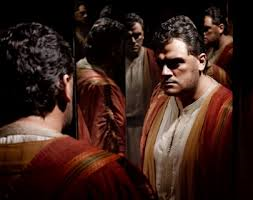 A few weeks ago an intriguing, and rather surprising news story broke about the debate about whether or not opera singers should black-up in order to perform the role of Otello in Verdi’s opera. For the first time the singer will not black up for the production at the Metropolitan Opera in New York. This article quotes Naomi Andre, co-editor of the book Blackness in Opera. “I do not know of a black singer singing Verdi’s Otello in a major opera house ever.” She suggests that the music is “wickedly difficult” so the role is tricky to cast. By tradition the role has been played by a white singer (in this case Latvian tenor Aleksandrs Antonenko) who has used black make-up. But director Bartlett Sher said: “Our cultural history in America is profoundly marked by our struggles with race and the questions of race…And it seems to me, as an artist growing up in America, that there’d be no way on Earth I could possibly figure out how to do it with that kind of makeup and that it just seemed like an obvious choice.” So no black make-up on stage, then, but Antonenko did have his skin darkened for the publicity shots. The production, incidentally, is receiving an Encore screening at Warwick Arts Centre on 21 October.

Metropolitan Opera Manager Peter Gelb comments that the Met has a colourblind casting policy, but black women have had an easier time landing top opera roles than have black men. Naomi Andre suggests that even now “Seeing a black male singer onstage with a white female heroine — there would be anxiety a lot of people could feel in the days of segregation, even in post-segregation times but where racial tensions are still very much around.” It’s a story that highlights the continuing contradictions and social unease surrounding colour in the USA and Europe, even in the civilised setting of the opera house where music is an international language.