All our yesterdays on film with the BFI 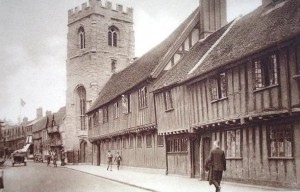 The grammar school and Guild Chapel around 1910

The Christmas pudding’s hardly cold and all those retrospectives on the year just gone are coming at us full tilt. And predictions for next year are following only just behind. As the quatercentenary of his death 2016 is going to be quite a year for Shakespeare: I’ve been gathering information about events that I’ll be releasing gradually on the blog in weeks to come. But at the dying of the old year I thought I’d mention a website in which we can all reminisce about years gone by and perhaps be surprised by events from longer ago.

It’s the British Film Institute’s Britain on Film site, a subset of the BFI’s YouTube channel. Many of the BFI’s services and films are available only to those attending an academic organisation or a personal subscription but the YouTube channel is free.

Britain on Film is intended to be searched by place: put a town into the search box and you’ll get a map showing how many films are available for it, and for the area surrounding it. Many of the films have been made by amateurs, so have a less official flavour than those on the Pathe News site, which is also free. There’s surprisingly little duplication of dates so they are complementary sources for moving images of UK history. The places covered are spread widely from Ben Nevis to Pwllheli to Luton, and films cover a wide spectrum of events including sporting achievements, World War 2 bombing, Hop picking and suffragette marches. 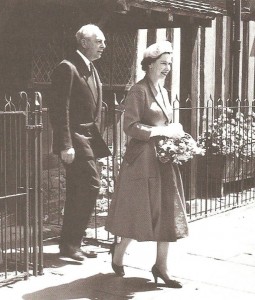 Inevitably I did a search for Stratford-upon-Avon and found twenty films listed, dating from 1910 to 1967. The early ones record details of “Shakespeare Land” in 1910, St George’s Day 1915, and Shakespeare’s Country in 1926. This one features some rare footage inside the Guild Hall in Stratford, currently being restored. Later films include those from 1957-59 including the Queen’s visit in June 1957. In 1963 the country was scandalised by the Profumo affair (John Profumo was the MP for Stratford-upon-Avon), and it’s noticeable that the locals are impervious to this “political bombshell” in spite of the interviewer’s repeated questions. As a reminder of Stratford’s importance as an agricultural area there are scenes showing farming activities, the Massey Ferguson tractor factory and a livestock show. Some of the most interesting footage shows workers in the old Royal Label Factory where metal signs were made for use right across the Empire. This factory existed in Old Town, much of which was originally built for workers on the railways but is now genteelly middle-class.

Shakespeare enthusiasts will be pleased to see the 1915 Birthday celebrations, with Frank Benson in the lead, and another film from 1958 including the then Director of the Memorial Theatre, Glen Byam Shaw, walking in the procession for Shakespeare’s Birthday accompanied by actress Dorothy Tutin.

After this trip down memory lane we’ll be celebrating the new year of 2016, one that is sure to be a year to remember for Shakespeare-lovers around the world.