His most potent art: the library of John Dee 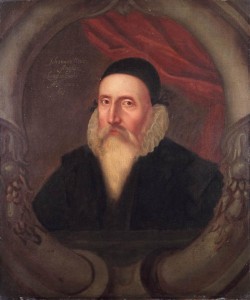 Portrait of John Dee, at the Ashmolean Museum Oxford

A new exhibition has just opened in London that explains more about one of the most intriguing people in Elizabethan London, John Dee. The Royal College of Physicians in Regents Park is hosting Scholar, courtier, magician: the lost library of John Dee, until 29 July 2016. To quote their site, he was “a Renaissance polymath, with interests in almost all branches of learning. He served Elizabeth I at court, advised navigators on trade routes to the ‘New World’, travelled throughout Europe and studied ancient history, astronomy, cryptography and mathematics. He is also known for his passion for mystical subjects, including astrology, alchemy and the world of angels.” This film is designed to accompany the exhibition.

This extraordinary man was also obsessed by books. He claimed to own 3000 of them, and 1000 manuscripts, making his one of the largest libraries in the country, larger than those owned by either Oxford or Cambridge Universities. Dee’s hunger for foreign travel where he met scientists from mainland Europe such as the geographer Mercator also proved the downfall for this great collection. While away, others plundered his library, and he never got the books back. Over 100 of his books eventually found their way to the Royal College of Physicians. Many others have been found in other collections including the Bodleian Library in Oxford, the British Library, the National Library of Wales and that of Trinity College Dublin, but the RPS has the largest collection of his books in one location. They include books on many of the subjects in which he was interested, including mathematical, astronomical and alchemical texts. 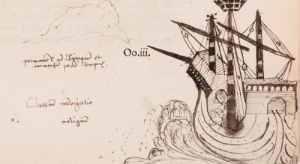 One of John Dee’s annotations showing a ship

His books can be identified because he annotated them so distinctively, and this video by the RCP’s Rare Books Librarian Katie Birkwood demonstrates some of his methods.

The exhibition is very much about the books Dee owned, and here is a film showing Peter Forshaw of the Ritman Library, Amsterdam, talking about Dee’s life and the books he actually wrote rather than those he read.

It’s often been suggested, and the idea is repeated by Peter Forshaw, that Dee was in some way the inspiration for Prospero in The Tempest. Both men certainly loved their books and studied them intensively. When Prospero recounts to Miranda the story of their exile from Milan he particularly mentions that Gonzalo,
Knowing I lov’d my books, he furnish’d me
From mine own library with volumes that
I prize above my dukedom.

Dee’s reputation as a magician and astrologer made him famous in his own time, and his name is still well known. In 2011 a musical, also called a folk opera, was written and performed that focused on Dee as magician. It was described as an attempt to connect with “haunted, magical England”. 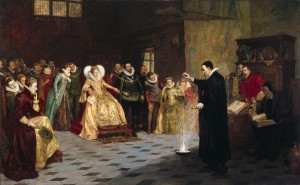 John Dee performing an experiment before Queen Elizabeth I. Oil painting by Henry Gillard Glindoni; Wellcome Library no. 47369i

He was however a serious scientist, originally studying mathematics, which he at first taught along with navigation. He instructed some of the most famous explorers of the time including Frobisher and was involved in the search for navigable North-East and North-West passages that, had they been found, would have had a profound effect on trade and travel. Astrology was another of his specialities: in 1555 he was imprisoned for working out Queen Mary’s horoscope (presumably because it might have foretold her death). Later on Queen Elizabeth valued his skill enough to ask him to choose the most auspicious day for her coronation and in 1579 consulted him about the matter of her possible marriage. She became his patron, supporting him intellectually if not financially. He dabbled in the occult, running séances. Later he became obsessed with the idea of conversing with angels and spirits, another link with Shakespeare’s Prospero. 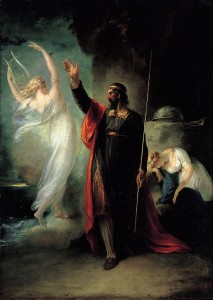 Dee has also been suggested as the inspiration for Marlowe’s Dr Faustus and Ben Jonson’s The Alchemist, and if this is the case it’s interesting how different authors interpreted the man and his achievements. Dr Faustus is a scholar who sells his soul to the devil in exchange for earthly knowledge and pleasure, while in The Alchemist the con men Subtle and Face cynically exploit greedy and gullible people who are willing to believe in alchemy and the philosopher’s stone that could turn metal into gold. Prospero’s magic powers have been honed, and are used, to right a wrong: “with my At least two societies exist to promote John Dee’s memory. The John Dee Society is primarily interested in his scientific and philosophical work, and creating resources to promote its serious study. The John Dee of Mortlake Society was formed to begin celebrating Dee’s connections with Mortlake beginning with the four-hundredth anniversary of his death in 2009. They continue to promote these connections, placing a plaque in his memory in St Mary’s Church where he was buried.

Towards the end of his life Dee dropped out of view and died in poverty and obscurity, and his remaining book collection seems to have been split up. This free exhibition is the first occasion on which many of his books have been put on display, an opportunity not to be missed.