Looking at the First Folio in 2016 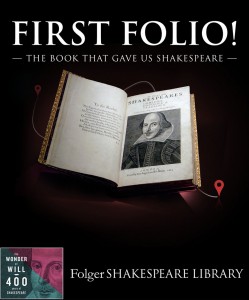 It’s still seven years until the four hundredth anniversary of the publication of the First Folio, arguably the most important book in the English language. But this year, when Shakespeare’s achievement is being celebrated, the first collected edition of his plays, known as the First Folio, is also getting a fair share of attention. Without it, we would have only around half his output, and we wouldn’t have lines like “If music be the food of love, play on”(Twelfth Night), “Is this a dagger that I see before me” (Macbeth), “We are such stuff as dreams are made on” (The Tempest) or even “All the world’s a stage” (As You Like It).

The Folger Shakespeare Library in Washington, DC, have certainly embraced the idea of sharing the First Folio as widely as possible with their project First Folio! The Book That Gave Us Shakespeare. Of the roughly 240 copies of the Folio still in existence, the Folger contains 82, and this national travelling exhibition will bring an original copy to each of the 50 states, plus Washington, DC and Puerto Rico, for around a month each. There’s more information about the tour here, and a digitised version of one of the Folger’s folios here. 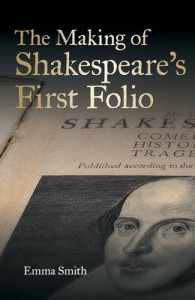 In the UK, Emma Smith’s new book The Making of Shakespeare’s First Folio, has been published by Bodleian Library Publishing, aiming to tell “the human, artistic, economic and technical aspects of the birth of the First Folio”. She looks in detail at how the book itself, rather than the plays it contains, came into being. One of the most charming stories relating to the Folio is that of the Bodleian’s copy which had been acquired in 1624 shortly after publication. It contained the first plays ever added to the library: Sir Thomas Bodley had ordered in 1612 that no plays and other “riffraff” should be acquired. It’s interesting that Shakespeare’s plays (not Ben Jonson’s) were the first to be recognised as having literary merit.

At some point it in the 1660s, faced with the brand new third edition that included several additional plays, the then-librarian made the choice often made by librarians to get rid of the redundant first edition. Needless to say, in the centuries that followed the Library regretted this decision, but the book’s location was not known. It was only in 1905 that the copy was discovered and bought back by the Library with the help of many subscribers. The book’s original binding, by Oxford man William Wildgoose, helped in its identification. You can still see the hole in the binding where the book was once chained in Duke Humfrey’s Library. Emma Smith tells the story, and shows off the book, in a delightful video on this page.

The spur for Smith’s book was the 2012 campaign to digitise the Bodleian First Folio, called “Sprint for Shakespeare”. Like the drive to buy the book back, this was achieved through public contributions, and the result is that the book is now available online here.

Writing about the book, Smith notes that the First Folio has acquired the status of a relic to be shown to devout cultural pilgrims, and “it’s in the nature of a relic that the circumstances of its production tend to be obscured”. 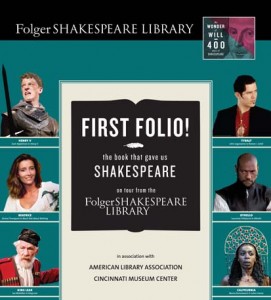 One of the panels in the Folger’s Exhibition

I’ll be looking again at Smith’s book, but that idea of the Folio as a semi-religious relic brings me back to the Folger’s travelling exhibition. I’m indebted to Dr Miriam Gilbert for sharing with me information about the event at the University of Iowa where she has taught for several decades. The Folger supplies the book and accompanying exhibition panels, but then it’s over to the venue to arrange events and complementary exhibits. All the venues are aiming to bring in as many people as possible, in particular children. And they’ve really embraced the idea: in New Mexico among many options there will be a staged reading Enter the Twain: Shakespeare in Mark Twain’s America. There will be an exhibition Shakespeare Comes to Hawaii in, of course, Hawaii, and the Oregon Shakespeare Festival will perform both Folio and Quarto versions of the first scene of King Lear, followed by a discussion. Between 29 August and 25 September The University of Iowa will receive its copy, particularly appropriate since Iowa City is the only UNESCO City of Literature in the United States. The University also boasts The Center for the Book, that merges research into the history of the book with.training in the techniques of bookmaking, and their exhibition will concentrate on these areas. Greg Prickman, Head of Special Collections, commented “In addition to showcasing the First Folio, the Libraries will be highlighting other examples of English early printed materials in an expansive exhibition. An understanding of hand-printing, binding and the book trade are all essential if one is to understand how the First Folio came into existence. These subjects are also covered in Emma Smith’s book, and I’ll be returning to it in another post soon.