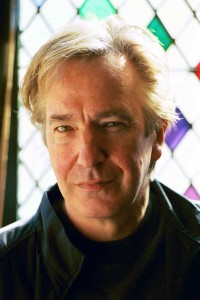 Another day, another hero gone. On Thursday 14 January 2016 it was announced that actor Alan Rickman had died, just a few days after David Bowie. Both died of cancer, and both were 69.

Unlike Bowie, Rickman took some years to decide what direction his life would take. He was a comparatively mature student at RADA and became a professional actor only in his late twenties. His talent was quickly spotted though (thanks to Richard Moore who recalls seeing him as Sherlock Holmes at Birmingham Rep in 1976), and he made his debut with the Royal Shakespeare Company in 1978. It was a mixed year in which many actors new to the company appeared: Jonathan Pryce, Paola Dionisotti, Ruby Wax, Juliet Stevenson. Rickman worked with all of them in different productions, and was directed by Peter Brook in his Antony and Cleopatra which starred the established actors Alan Howard and Glenda Jackson, as well as Patrick Stewart and David Suchet. He played minor roles in the play, as well as Boyet in Love’s Labour’s Lost, a role in Captain Swing at The Other Place, and, his largest role, Ferdinand in The Tempest. On the BBC’s Front Row on 14 January Juliet Stevenson, who became a lifelong friend, recalled working in this production. The production was not a great success but it’s clear that during this year Rickman made friendships that would endure throughout his life.

Between this and his next appearance at the RSC Rickman was cast by the BBC in their series Barchester Chronicles as the oily Obadiah Slope. In a wonderful cast of distinguished actors Rickman shone as perhaps the first of the unpleasant but compelling characters for which he became known. 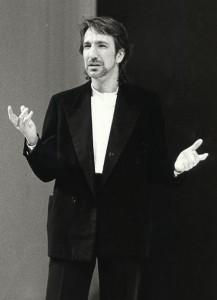 Alan Rickman as Jaques in As You Like It, RSC 1985

Back at the RSC in 1985 Rickman was cast in leading roles: Jaques in As You Like It with Juliet Stevenson as Rosalind, Achilles in Troilus and Cressida with Stevenson and Anton Lesser, and most notably as the Vicomte de Valmont in Les Liaisons Dangereuses, again with Stevenson and Lindsay Duncan. This production became a major hit, not least for Rickman’s charismatic and irresistible sexual predator suffering from melancholic self-awareness that made him finally almost tragic.

In films he showed many different sides to his acting: he was romantic in Anthony Minghella film Truly, Madly, Deeply, upright and loyal in Emma Thompson’s Sense and Sensibility, and wildly comic in Robin Hood: Prince of Thieves in which he stole every scene from Kevin Costner. He appeared in all of the Harry Potter films as one of the most important of the teachers at Hogwart’s, Severus Snape.

There were other appearances on stage in Shakespeare: a Hamlet, and Antony to Helen Mirren’s Cleopatra. This Guardian piece includes a link to an interview with him about Shakespeare, including his reminiscences of working with Peter Brook 1978, when Brook told his cast that they would never be as good as the play: something of a relief to the actors who felt the production was not going as well as they wished. Shakespeare remained important to him: here is a clip of him performing Sonnet 130.

His voice, rich and slightly nasal, was used with great subtlety, and quite unmistakeable. Peter Bradshaw’s obituary explains the qualities that made him so successful:

His aquiline face, with all its magnificent hauteur made him a star: something between an eagle and a big cat. And that rich, resonant voice exerted a hypnotic hold on audiences, a bass rumble which could sound like a creak or a groan or a beckoningly sensual purr. It came from between lips which were kept mysteriously almost closed, like a ventriloquist’s. Alan Rickman morphed from being a Shakespearian leading man to being a character actor of enormous flair — via a wonderful period of being a wildly charismatic bad guy in the movies.

Rickman’s career was still developing, particularly as a director, and it’s clear from interviews recorded today that he was much loved. He will be greatly missed.

While posting this blog, I’ve heard about the death of another Shakespearian actor and director. On Wednesday 13 January Brian Bedford died aged 80, also of cancer. Bedford was born and worked in England, performing in 1957 at Stratford, playing among other roles Ariel to John Gielgud’s Prospero in The Tempest. He later moved across the Atlantic and took a leading part in the Stratford Shakespeare Festival in Canada where he completed more than 27 seasons of acting and/or directing. His death won’t hit the headlines as Alan Rickman’s has but his achievements were great and he too will be missed.