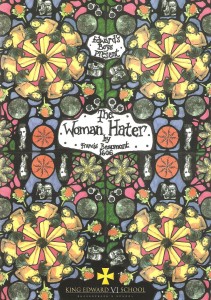 Now, a real theatrical treat. On 11 March 2016 I attended the latest production by Edward’s Boys, the all-boy company directed by Perry Mills of King Edward VI School, Stratford-upon-Avon, The Woman Hater. The play is a study of outrageously obsessive behaviour that allows for terrifically over the top performances. Edward’s Boys grasp these opportunities with gusto, skill, and a wicked sense of humour. It would be unfair to single out any of the individuals but suffice it to say that among acting, singing and playing of uniformly high standard there are several bravura performances. 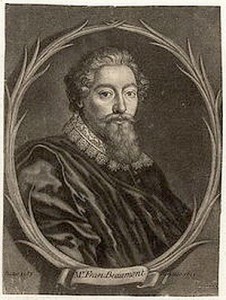 The play was written by Francis Beaumont in 1606 specifically for the Children of Paul’s, who gave its first, and probably only, performances. It was Beaumont’s first play, written when he was only 22. Beaumont is best known as the other half of the profilic collaborative writing partnership Beaumont and Fletcher. Fletcher went on the collaborate with Shakespeare, but Beaumont died in 1616 at a tragically early age, having given up writing for the stage in around 1613. The Woman Hater is being performed as part of a two-day event at King’s College London, Beaumont 400, commemorating the 400th anniversary of his death, designed to draw attention to his still-neglected work. In her programme essay Lucy Munro points out that when he died he was buried in Westminster Abbey and was expected to be as renowned as Chaucer, only to be almost completely overshadowed by his contemporaries.

The main serious element to the story would have had real resonance with the original audience. The play is set in Italy, and a plot threatening the assassination of the ruler of Milan, the Duke, is foiled. The play was staged just months after the discovery of the very real Gunpowder Plot in London. Inevitably, though, this production concentrates on the main comic plots featuring a woman-hating man and a gourmandizing courtier. Almost everybody is mocked. In another programme essay, Gordon McMullan describes it as “playful, knowing, hilarious, willful, fast-paced, irreverent, unforging, exhilarating”.

The Shakespeare references are unavoidable too: the greedy courtier is obsessed with the desire to taste a rare fish, the Umbrana. Another courtier comes in to break the bad news of the fish’s disappearance, and Beaumont chooses this moment to quote from the Ghost scene in Hamlet: “Speak! I am bound to hear!”, says the gourmand, and the courtier responds:
“So art thou to revenge, when thou shalt hear.
The fish head is gone, and we know not whither”.

Beaumont assumes that most of his audience will recognise that quote, and the incongruity of the situation makes it a joke on the character, not on Shakespeare.

The Woman hater of the title, inevitably, is forced into a long and very funny scene with the feisty heroine, Oriana, who he then imprisons in a brothel. There she appears at a window where she is observed. The Duke has revealed to the audience, though not to Oriana, that he is in love with her, and as a result of all this suspects her with the Woman hater and others. Suddenly we find ourselves in the Hero plot of Much Ado About Nothing. A chastity test is devised in which she has to declare her innocence, and having tested her virtue the Duke then proposes marriage to her. Now the play enters the territory of the last scene of Measure for Measure, another recent play by Shakespeare that Beaumont would have known. Shakespeare himself was not averse to borrowing plots from other people, and this would have been seen less as plagiarism than imitation, the sincerest form of flattery. It’s fascinating to see how these Jacobean plays referred to each other, and how much their audiences would have been expected to recognise those references.

As I write, the play still has its final UK performance at King’s College, to be followed by several performances in France from 22-24 March. After that it is likely to be available on DVD as are the Company’s earlier productions.

Artist’s impression of The Other Place auditorium

Another reason for this being a theatrical treat is that I saw it at the RSC’s redeveloped Studio Theatre The Other Place. It’s the very first production to be staged there. The auditorium is in the shell of what used to be the Courtyard Theatre and the whole building is due to open to the public on 21 March. Although Studio work won’t be as integrated into RSC schedules as it was from the 1970s to the 1990s, it is good news that there will be some studio productions. The small scale, intimacy and opportunity for swift changes of mood provided by the studio space contributed to the production by Edward’s Boys and it will be terrific to see it used as a flexible performance space in the future.