Found in Warwickshire: the Shuckburgh folios 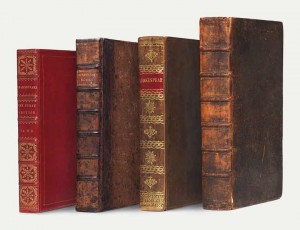 The four folios being sold by Christie’s

Anyone who hopes that there are Shakespeare treasures still to be found must have felt their hearts flutter when it was announced that the major auction house Christies is to sell copies of all four Shakespeare folios in May. Why the excitement? None of the folios is exactly rare, though they are valuable. Several hundred copies of the First Folio still exist in varying states of completeness.

But this copy is unknown, and three of the four copies for sale come from the collection held at Shuckburgh Hall. The First Folio is known to have been purchased by Sir George Augustus Shuckburgh-Evelyn in around 1800 and has remained quietly on the shelf ever since. Shakespeare’s First Folios are extremely well-documented. Several censuses have been compiled detailing all the copies of this book, starting with Sir Sidney Lee in 1902, followed by Anthony West’s in 2001 and Eric Rasmussen’s that I wrote about in 2011. Academics will be hoping to get a look at this newly-discovered copy because unlike modern books, each copy of a book of this period is unique. It may contain annotations, or the pages may exist in different states, shedding light on printing-house practices or on the manuscripts from which the books were printed.

Even since 2011 there have been two discoveries: the St Omer copy found in France that brought the total up to 233, and this one, presumably number 234. The library in France didn’t realise that the book was an original 1623 edition, but the Shuckburgh family had always known, but just didn’t tell anybody. 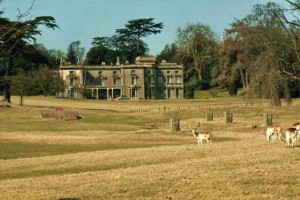 The other interesting feature of the story is that Shuckburgh is in Warwickshire, in the north of the county close to Northamptonshire. The estate has been in the same family since the 12th century, that’s 900 years, though the house “only” dates back to the 15th century, with a nineteenth-century facade. Sir James Shuckburgh, the 14th Baronet, only recently inherited the title and the house after the premature death of his father Sir Rupert in 2012. It’s not known why the 6th Baronet originally bought his copy of the First Folio, though he was a learned man: having succeeded to the title in 1773 he was returned to Parliament for the county of Warwick in 1780, his main interests being mathematics and astronomy. He was a member of both the Royal Society and a Fellow of the Society of Antiquaries, and lived most of his life at Shuckburgh, dying there in 1804. He was a great collector of books, and perhaps he took an interest in William Shakespeare as a fellow Warwickshire man. The Visitors Books of Shakespeare’s Birthplace only survive from 1812, too late for Sir George, but they do reveal that Shuckburghs visited in 1817. It isn’t clear whether all three Folio editions were purchased by Sir George Augustus Shuckburgh-Evelyn or by another of his line, but at some point one of them cared enough to collect these treasured items.

It is an extraordinary story: Lee, West and Rasmussen have chased First Folios around the world, and here’s one that has been sitting in the library of a stately home only twenty miles from Stratford for the past two hundred years. It’s not the only copy of the Folio with a local history though. One of the copies held by the Shakespeare Birthplace Trust was acquired by Stratford historian Robert Bell Wheler early in the 1800s, and along with his papers was given to the Shakespeare Birthplace Trust after his death in 1857, where it has remained.

The four books are to be displayed in New York from 1-8 April, and then in London 20-28 April before being auctioned in London on 25 May. The First Folio is said to be in excellent condition and is expected to sell for up to £1.2 million. Margaret Ford, for Christie’s, has said “The family were aware of it and knew what it was, but they never crowed about it. This copy was unknown to academics until last week…To come out from the shadows is extraordinary”. The Third Folio, rare because many copies were lost in the Great Fire of London, is estimated at £300,000 – £400,000 while the more common Fourth Folio may go for a mere £15,000- £20,000.

It feels sad that these books with all their Warwickshire connections will almost certainly be sold abroad. The hope must be at least that they’ll go somewhere they can be studied, and will not disappear back into the shadows.

For further reading, here is the Telegraph’s report, and one from the Antiques Trade Gazette.