Shakespeare and the Welsh “Upon St Davy’s day”

Sam Cox and Pistol and Brendan O’Hea as Fluellen at Shakespeare’s Globe. Photo by John Haynes

Every first of March the Welsh celebrate St David’s Day. Shakespeare was well aware of this: in Henry V the Welsh Captain Fluellen says to the King:
I do believe your majesty takes no scorn
To wear a leek upon St Davy’s Day.

Fluellen is just one of a number of notable Welshmen in Shakespeare’s plays. He sometimes makes fun of them, as in the argument between Owen Glendower and Hotspur in Henry IV Part 1. Hotspur refuses to be over-awed by Glendower’s bragging:
Glendower:                 at my nativity
The front of heaven was full of fiery shapes,
Of burning cressets; and at my birth T
he frame and huge foundation of the earth
Shaked like a coward.
Hotspur: Why, so it would have done at the same season, if your mother’s cat had but kittened, though yourself had never been born.
Glendower: I say the earth did shake when I was born.
Hotspur: And I say the earth was not of my mind, If you suppose as fearing you it shook.
Glendower: The heavens were all on fire, the earth did tremble.
Hotspur: O, then the earth shook to see the heavens on fire, And not in fear of your nativity.

Shakespeare is also fond of the Welsh. In Henry V Fluellen is a bit of a fusspot, but the King’s on his side:
Though it appear a little out of fashion,
There is much care and valour in this Welshman.

And again in Henry IV Part 1 Glendower’s daughter is married to Mortimer: though they don’t speak each other’s language, their relationship is romantic, the Welsh lady beautiful and musical:
I understand thy kisses and thou mine,
And that’s a feeling disputation:
But I will never be a truant, love,
Till I have learned thy language; for thy tongue
Makes Welsh as sweet as ditties highly penn’d,
Sung by a fair queen in a summer’s bower,
With ravishing division, to her lute.

As a child Shakespeare is sure to have been used to Welsh traders and drovers passing through and staying in Stratford for the town’s markets, hearing their Welsh voices. It’s also probable that Shakespeare’s schoolmaster was Welshman Thomas Jenkins who would have been a great influence. Much has been made of the fact that in The Merry Wives of Windsor the Welsh Parson Hugh Evans is also the schoolmaster to young William Page. Elizabeth O’Connor has written a blog for Shakespeare’s Globe on Shakespeare and the Welsh with lots of additional information on the subject. 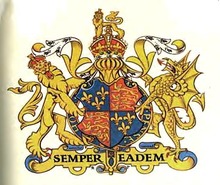 Shakespeare had another reason to flatter the Welsh. The Tudor dynasty originated in Wales, and that other symbol, that appears on the Welsh flag, the red dragon, was first incorporated into the royal coat of arms by Henry Tudor (Henry VII) in honour of his Welsh ancestry. It remained there down to the last of the Tudors, Queen Elizabeth 1, whose coat of arms included the English lion on one side and the Welsh dragon on the other.

Back to the leek, this vegetable has been an unlikely symbol of Welshness since before Shakespeare’s time, and in Henry V, the Englishman Pistol makes the mistake of insulting it. In retribution, Fluellen forces him to eat it “If you can mock a look, you can eat a leek”. Though it was traditional for Welshmen to wear a leek on their hats on 1 March as a symbol of national pride, it’s now rare for people to do this except at International Rugby matches. 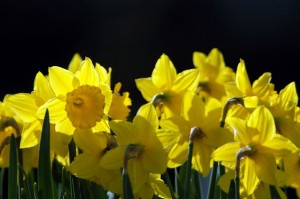 Another symbol of Wales, the daffodil (also known in Wales as Peter’s Leek), is much more frequently worn nowadays though until relatively recently the flower was not particularly associated with the country.

This year on St David’s Day there will be great celebrations throughout the country, but particularly in Cardiff where a parade travels from the City Hall to the Castle. There’s free admission to the Castle all afternoon, with entertainment from lots of Welsh bands, and many other historic buildings are open free to celebrate Wales’s cultural heritage. There will naturally be a great deal of music, as well as running and parading. The Welsh rugby team are also doing well in the 6 Nations and there will probably be a lot of leeks in evidence for their forthcoming match against the English team. But will the English be forced to eat the Welsh leeks at the end of the game?