First Folio discovery on the Isle of Bute 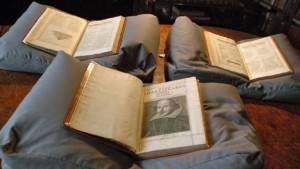 The Isle of Bute folio, bound in three volumes

It’s only two weeks or so since it was announced that an unknown copy of the 1623 Shakespeare First Folio had been found at Shuckburgh House in Warwickshire (see my blog on 24 March), and now another one has been found on a Scottish island to the west of Glasgow. The copy at Mount Stuart House on the Isle of Bute raises the number of Folios still in existence to 235, an astonishingly large number from the assumed print run of about 750. 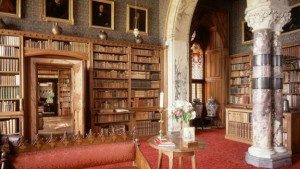 The library at Mount Stuart House, Isle of Bute

Apparently the library at Mount Stuart House is substantial (it certainly looks it from the picture), and may contain other treasures. This is the link to the BBC story and Emma Smith was also interviewed on the Today programme at about 7.45 this morning. It will be available on the site after transmission of the programme finishes.

There is also a lot of information about the book’s ownership history on the Mount Stuart website: I quote:

Professor Smith has also confirmed that our edition of the Folio belonged to Isaac Reed, a well connected literary editor working in London in the 18th Century. Reed (1742 – 1807) was the son of a baker and was initially apprenticed to a solicitor, eventually setting up his own practice as a conveyancer at Staple Inn, Holborn. Reed’s largest work was the Biographia dramatica, published in two volumes in 1782, which was a biographical work on significant dramatists and a descriptive compendium of their plays. Reed re-edited Samuel Johnson and George Steevens’s edition (1773) of Shakespeare which was ultimately published in ten volumes in 1785.

Here too is a link to Emma Smith’s article in the Times Literary Supplement explaining more about the book’s provenance, and about Reed.