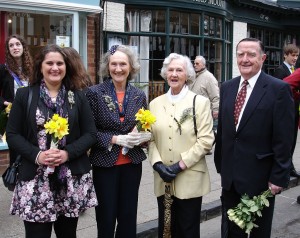 The 400th anniversary of Shakespeare’s death, and 452nd anniversary of his birth, is less than two weeks away now, and all the news about the events of the weekend have now been released.

If you’re in the Stratford-upon-Avon area and want to find out more about how the event is organised, and what the plans are for the future, you might like to come along to the meeting of the Shakespeare Club on Tuesday 12 April when Town and District Councillor Tony Jefferson has agreed to talk to members and guests. If you aren’t a member, entrance is only £3. The venue is the Shakespeare Institute in Church Street, Stratford and the event begins at 7.45.

To provide a bit of background to the current events, Susan Brock, Secretary of the Club, and myself, also on the committee, are going to give a short illustrated history of the Celebrations. It’s a particularly appropriate date for the Celebrations too as the very first occasion when the Birthday itself was marked in the town was 1816, exactly 200 years ago. Since then the day has never been allowed to pass without being marked in some way. 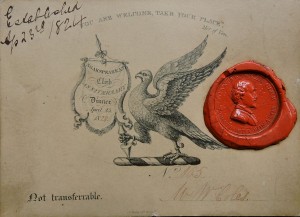 Ticket for the 1828 dinner of the Shakespeare Club

The Shakespeare Club itself has been closely bound up with the Celebrations for many of the intervening years: it was in fact formed in 1824 specifically to organise some kind of celebrations, though these were originally in the form of a private dinner. The illustration shows a ticket issued for the dinner in 1828, held at Shakespeare’s Hall (as the Town Hall was then known). It was quickly realised that the public should be involved, and processions, street decorations, fireworks, the ringing of church bells, marching bands, the flying of flags and banners became essential elements. The Club’s history is much more varied than might be thought: it took on the responsibility for many of the sites associated with Shakespeare, such as the Church monument and the Birthplace itself, was involved with the building of the first permanent theatre in the town, sponsored performances of Shakespeare’s plays and organised a performance of Ben Jonson’s Jacobean masque Pan’s Anniversary. This year’s Celebrations will feature a jazz band from New Orleans, but the very first contribution to the birthday in Stratford came in 1836 when George Jones, the American Tragedian, gave a 2-hour oration on Shakespeare, presenting the Club with an American flag to be flown on each birthday.

Susan Brock and myself are currently preparing a book on the history of Stratford-upon-Avon’s Shakespeare Club, to be published in the autumn: (150pp, paperback, illustrated in full-colour). On publication the price will be £11.99, but as long as orders with payment for £10 are received by 7 May subscribers will receive a copy of the book on publication signed by the authors, and the name of the subscriber will be printed in the List of Subscribers within the book. The price above does not include postage, so if you are unable to collect the book from Stratford-upon-Avon the subscription price will be £12.99 (UK only).

TO SUBSCRIBE please send a cheque for £10 (£12.99to include UK postage), payable to The Shakespeare Club together with your name as you wish it to appear in the book, your address, and a stamped addressed envelope (if you wish a receipt to be mailed to you), before 7 May 2016, to Dr Susan Brock, Secretary, The Shakespeare Club of Stratford-upon-Avon, Daisy Cottage, Front St., Ilmington, Shipston-on-Stour CV36 4LA.