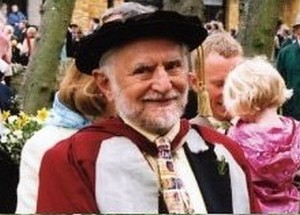 Shakespeareans will be delighted to hear that Professor Stanley Wells has received a (long-overdue) knighthood in the Queen’s Birthday Honours List.

His books alone would take up several shelves, covering a wide variety of Shakespeare-related subjects: my own tally is only about half a dozen including his comprehensive and extremely readable volume Shakespeare: for all time, the little book Looking for sex in Shakespeare (slender not because he failed to find any, but because it is based on a lecture series), the New Penguin edition of A Midsummer Night’s Dream, his book on Shakespeare’s fellow writers, Shakespeare & co., and the recent collection of essays looking at Shakespeare’s life through those of people he knew, edited with Paul Edmondson, The Shakespeare Circle. At 86, he shows no sign of slowing down or stopping.

He has also been a distinguished teacher, administrator and adviser. He was Director of the Shakespeare Institute from 1987 to 1997, and is now Emeritus Professor of Shakespeare Studies at the University of Birmingham, also Honorary President of the Shakespeare Birthplace Trust.

Accepting the honour of Knighthood he is typically generous to his colleagues: “Throughout my career as teacher and scholar I have enjoyed and benefitted enormously from collaborating with fellow scholars from all over the world, and I hope they will share my pleasure in receiving this award.”

Nobody has spent more time and effort in teaching, writing and editing Shakespeare, and the honour is richly deserved after a lifetime of dedication. In particular, he must be praised for wearing his encyclopaedic knowledge lightly, being as capable of writing a popular book as a learned one. There must be many thousands of people who have gained from his work, even if they have not realised it.

It’s particularly appropriate that Professor Wells has been granted this honour on the weekend of the Queen’s 90th Birthday, during the year of the 400th anniversary of Shakespeare’s death, and just a few weeks before the prestigious International Shakespeare Association and more than 600 academic delegates arrives in Stratford-upon-Avon for its four-yearly conference. It’s the first time it has been held in the town since 1981: let’s hope they hold a big party to mark both his Knighthood and his long and distinguished career.

One Response to Arise, Sir Stanley!