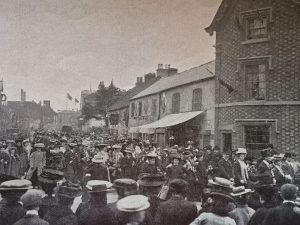 The 1907 procession showing, on the cottages, some of the decorative shields

Posts on this blog have been few and far between in the last couple of months, because, with my friend and ex-colleague Susan Brock, I have been writing the history of Stratford’s Shakespeare Club. We have unearthed a lot of information that hasn’t been seen before, reinterpreting documents and correcting assumptions.

Quite by chance, I’ve also found that some of my relatives had connections with the Club. I knew I had family who were interested in Shakespeare: my grandfather Frederick William Tompkins was sub-sacristan at Holy Trinity Church where among his other duties he showed visitors the tomb. Some of the famous people he met included Sarah Bernhardt and Ellen Terry. In the 1920s he became the Guide at the Birthplace, staying there until after the war when he retired aged about 70.

I knew he was artistic: I have a little painting he did of the view of the Falcon and Guild Chapel from the bottom of Scholars’ Lane where he lived for several years, and he did metal engraving, probably as a sideline: he engraved my initials on my christening mug and napkin ring. However during our researches I found several extra things out about him and another member of my family.

He was a member of the Shakespeare Club for several years from 1901-1905 when he was struck off for non-payment of subscriptions. His name is the very last in those recorded in the Club’s membership register for the period. This would have been not long after he got his job at the church, and during this period my father was born. I had always assumed that at this date the Club consisted of people who were more affluent than my family were, but perhaps he expected to increase his knowledge of Shakespeare. He didn’t leave the Club because it was a drain on his time, because his enthusiasm for Shakespeare was soon put to the test.

During the first few years of the twentieth century there was a big revival of interest in celebrating Shakespeare’s birthday, led by the Shakespeare Club. Elaborate decorations were produced and volunteers worked to make them the biggest and best they could. In 1907 he made and painted all the heraldic shields that were displayed in the town. The decorations were so lavish that the Stratford-upon-Avon Herald published a special supplement which describes them: “the painted shields both in this and the remaining part of the route were undertaken solely by Mr Tompkins, of Chapel-street, an indefatigable and skilful worker”. He decorated shields that were on display from the Guild Chapel down towards Old Town. “The house of Doctor Hewer can boast a shield of Elizabeth and another of James 1. A large and striking shield displaying the Brewers Arms…and the adjacent little cottages, among which is the Windmill Inn, are the proud bearers of six interesting and historically curious shields bearing a close connection with the Shakespeare family: Arden of Wilmcote, Shakespeare imp. Arden, Hall imp. Shakespeare,  Thomas Nash, Thomas Quiney, and Sir John Barnard. In the centre…are emblazoned the arms of the mighty dramatist himself. It may be observed that the hatchment mounting of these shields greatly adds to their effect. Then the arms of John and Robert de Stratford, and Ralph de Stratford, and on the High School a fine mounted shield displays the arms of Stratford on Avon.” A photograph shows some of these shields, rather distantly.

He also contributed in 1908, though his contribution is not specifically described. Among the other artists was the young Bruce Bairnsfather, the First World War cartoonist who created the character of Old Bill and the well-known line ‘Well, if you knows of a better ‘ole, go to it’. 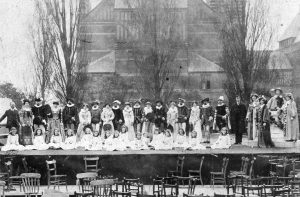 The cast for Pan’s Anniversary, in front of the Memorial Theatre. The maypole dancing girls, in white, are seated.

I discovered another charming connection. In 1905 the Shakespeare Club sponsored and staged a masque by Ben Jonson, Pan’s Anniversary, that took place on the Bancroft Gardens. This was an important event in the Club’s history showing a willingness to join in with the fashion for pageantry and folk festivals that was just beginning. The few photos that survive show the main participants, and the Maypole dancing that accompanied it, when local schoolgirls, dressed in white, performed on the wooden stage. They are all named in the programme, and I was surprised to see one of them was Isabel Tompkins. A bit of checking of the family tree showed that she was my great aunt, aged 13 at the time and living with her parents Alfred and Ada in West Street. Her father was an engineer working on the railway: many of the little terraced houses in that area, now very fashionable, were built for workers on the railways.

Researching the history of the Shakespeare Club I have been surprised over and over again by how much the Shakespeare “industry” in the town owes to ordinary people, from those who founded the club in 1824 to those who have given unselfishly of their time behind the scenes, a tradition that persists today.

If you would like to read the whole story, the book, entitled “Long life to the Club call’d Shakspearean”: the story of the Shakespeare Club of Stratford-upon-Avon”,  will be published in autumn 2016 and full details will in due course appear on the Club’s website.