Finding Shakespeare in the tropics 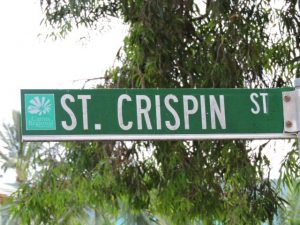 I’m writing this from the tropical paradise that is Northern Queensland, Australia. We’ve been staying just north of Cairns at the hotel Paradise on the beach at Palm Cove. It certainly lives up to its name, with sea-washed beaches fringed with palm trees.
The sights and sounds inevitably make me think of the magic isle in The Tempest, which “must needs be of subtle, tender and delicate temperance…The air breathes upon us here most sweetly”. And Gonzalo, ever the optimist, declares:
Here is everything advantageous to life!
How lush and lusty the grass looks! How green!
But here, too, are natural hazards: jellyfish (bottles of vinegar are posted by the beach to counteract the stings), crocodiles (warnings everywhere), and sharks. Not far from here a woman was taken by a crocodile only a few weeks ago. We haven’t been near the water much except for the swimming pool. 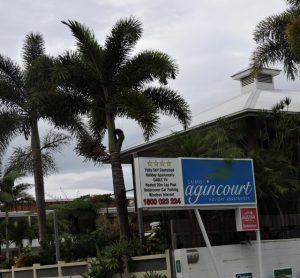 The references to Shakespeare have been few and far between, though we thought we had hit the jackpot this morning on a walk to the neighbouring village of Clifton Beach. There we found an apartment block called Agincourt, and just nearby a road sign proclaims St Crispin Road. We asked a couple of ladies standing nearby if they were aware of a Shakespeare connection.
Oh, no, they said, lots of features of the village were names after the reefs. The Agincourt reef, or reefs, are on the very edge of the Great Barrier Reef near to the continental shelf. St Crispin reef is nearby. We had already been interested in the names of some of the reefs. A few days ago we had visited Michaelmas Cay, a tiny spit of sand barely above sea level, barren of any plants but inhabited by thousands of sea birds.
We had thought that, perhaps, these had been named during Captain James Cook’s voyage in 1770 when he mapped the eastern coast of Australia. He is known to have named Magnetic Island, near to Townsville, where we travel next for the Australian Chamber Music Festival, and Green Island was named by him in memory of astronomer Charles Green who was also on the Endeavour. Maybe, we thought, Cook had spotted Michaelmas Cay at the end of September, and Agincourt reef in October? But a little research revealed that Cook had visited Australia only between April and August, spending some weeks ashore mending the Endeavour after it had been damaged by sailing into the reef.

So Cook does not seem to have any role in naming these reefs, and I’ve found a note that Michaelmas Cay was still being called Oyster Cay in 1849. Other parts of the reef have interesting names that may hark back to the same period, including West End, Three Sisters, and even Stonehenge. Perhaps they were given these names during the mid-nineteenth century when people were being transported from England and the British Empire was at its most powerful. It’s good to see that now some efforts are being made to recognise the importance of the reefs to indigenous people, but there’s no sign of their traditional names being adopted again. Cook’s meetings with the aborigines was always guarded, or downright hostile. They certainly didn’t react like Caliban did to the Europeans he encountered, offering:
I’ll show thee the best springs, I’ll pluck thee berries;
I’ll fish for thee and get thee wood enough.
Probably the difference between fact and fiction.

This entry was posted in Legacy and tagged Australia, Cairns, Palm Cove, Queensland, The Tempest, Townsville. Bookmark the permalink.