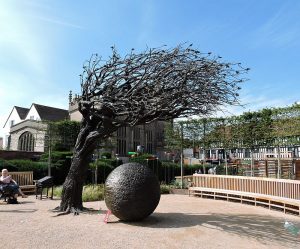 The summer holidays are coming to an end, but that doesn’t mean that Shakespeare-related attractions are winding down. In fact Stratford-upon-Avon is a destination that thrives all year round and in all weathers.

In the year marking the 400th anniversary of Shakespeare’s death there are a number of facelifts and new developments that make the town even more attractive to visitors and one, the re-imagination of New Place, Shakespeare’s home, has just opened. The site has been open to the skies since the 1750s when the existing building was demolished, and from the early 1800s there has been a general agreement that it should remain unbuilt-on. For many years it has been accessed through the house next door, Nash’s House (where Shakespeare’s granddaughter Elizabeth lived with her first husband Thomas Nash). The site of Shakespeare’s house has been visible only as a sunken bumpy area centred round a well, while further back there has been a colourful knot garden, and behind that the Great Garden, with its mulberry tree, said to have been grown from a cutting of the tree planted by Shakespeare.

The SBT have set themselves a series of challenges: to show off the results of the archaeological excavation, to explain what the house was like and how people lived in it, to help people “meet the man behind the work”,  and to investigate how Shakespeare’s genius still inspires artists today. There are certainly successes. For years visitors have had little sense of the building that was once there, so now they enter through a magnificent gateway that stands where the front door once was. Once inside it’s possible to trace the outlines of the walls and to imagine it as a house. The circle of pleached hornbeams, with its wooden seating, provides a focal point and a place to contemplate Jill Berelowitz’s His Mind’s Eye, the bronze wind-blasted tree and sphere suggestive of the storm from King Lear as well as the force of the imagination. 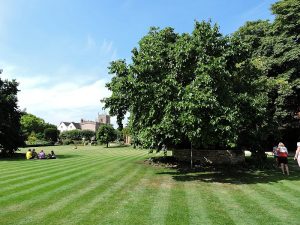 The Great Garden with the Mulberry Tree

The gardens themselves are lovely. It’s good to see the knot garden again, apparently returned to the plan originally devised by Ernest Law in the early twentieth century, and the Great Garden containing its long borders, historic mulberry tree and the alto-relievo from the Shakespeare Gallery. On a warm afternoon people were sitting on the grass enjoying the peaceful atmosphere, as they have done for generations. Locals will be pleased to know it is easy to get a pass so they can visit the Garden free, and the whole site including the exhibition areas is wheelchair-accessible, a great advance.

For me it’s the simple things that work the best: I found the main part of the garden a bit fussy with too many things going on all at the same time. By reading the strips containing lines from the sonnets that are set into the paving, for instance, I completely missed seeing the old well, one of the original features, and some of the other sculptures. Inside the newly-built and refurbished exhibition areas it’s the other way round, with not enough detail to grab the attention, but this will surely change over time and the site as a whole is already well worth a visit. 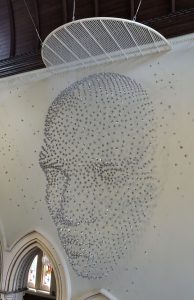 Another project that is still to reach its conclusion is the restoration of the Swan Wing, the oldest part of the original Shakespeare Memorial Theatre. The promised exhibition, The Play’s the Thing, will be “a magical journey through 100 years of theatre-making”. It will open in October, up on the first floor of the building. Even now, though, it’s worth making your way up the stairs to see a stunning work of art, For All Time, by Steven Follen, a reference to Romeo and Juliet as well as Ben Jonson’s poem dedicated to Shakespeare. In the sculpture the mask-like face emerges from two thousand metal stars, each of which “hovers on a strand of wire”, a simple idea beautifully carried out.

Also new for visitors this year is Shakespeare’s Schoolroom and Guildhall. The glorious upper room is still used as a teaching space so opening hours are restricted during term time, but for now it’s open from 10 to 5. 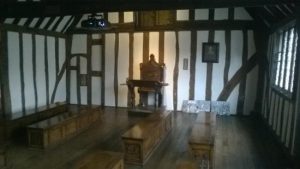 I still haven’t managed to get inside to explore it properly since it reopened though I agree with historian Michael Wood’s assessment of it as “One of the most atmospheric, magical and important buildings in the whole of Britain” and “a memory room for the town and the nation” Downstairs is the less beautiful but equally important Guildhall, the centre of the town’s administration and the space where Shakespeare probably experienced professional theatre for the first time. 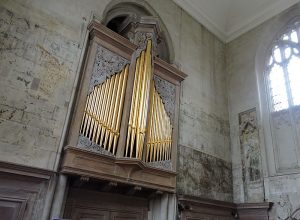 The Guild Chapel, including its new organ and some of the medieval wall paintings

The opening of these other buildings also allows the Guild Chapel, that stands between the two, to shine at last. It has been Stratford’s best-kept secret for too long. On the walls are some of the finest surviving medieval wall paintings in the country, two of the best of them about to undergo conservation work. The paintings were whitewashed over during the Reformation period and only rediscovered in the early 1800s, hence their ghostly appearance, but now information panels courtesy of Stratford’s Town Trust are in place to help explain them to visitors. Best of all the Chapel is free to visit (please make a donation).

2 Responses to Late summer in Stratford-upon-Avon