Talking to the Stratford Society

The publication and now the promotion of the book I’ve co-written with Susan Brock on the history of Stratford’s Shakespeare Club has been a constant and enjoyable preoccupation over the last few months. I’m pleased to report that with the book now being stocked by the local branch of Waterstones and the Shakespeare Birthplace Trust’s own bookshop in Henley Street, sales are looking healthy. Copies are also being sold direct via the Club’s website.

Next week, on Monday 20 February, we are giving a presentation to the Stratford Society, the  town’s Civic Society, set up in 1966 with the aim of protecting the heritage of the town and its residents. It takes a particular interest in the town’s buildings, promoting high quality design in keeping with the character of the famous and much-visited area.

It’s appropriate that we’re talking to this Society because decades, even centuries before preservation societies were founded to care for the historic buildings in our towns, Stratford’s Shakespeare Club had done just that. By the 1820s places associated with Shakespeare were under threat: his own house at New Place had been first replaced, then razed to the ground, his monument in the church was in poor repair, and the Birthplace in Henley Street, in spite of being open to tourists, appeared semi-derelict. 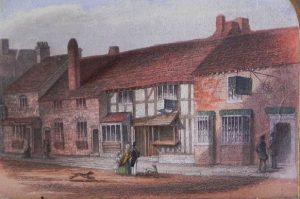 Shakespeare’s Birthplace before it was purchased for the nation, c. 1845

Physician Dr John Conolly was an inspirational leader of the Club. At the 1835 dinner he addressed the members, suggesting that protecting the Shakespearean relics in the town should be a priority: “for a long time after his death there was either an indifference to his immortal memory, or the want of a Shakspearean Club to concentrate individual regard and give it an honourable utility”. From the 1830s to the 1860s the Club helped to care for these sites, making sure their future was secure. In the case of the Birthplace this meant promoting its purchase by public subscription to ensure it was not left in private hands. When the Shakespeare Birthplace Trust was finally created, many years after the purchase, it became a sort of blueprint for how buildings associated with literary people should be dealt with. Many British writers, including Jane Austen and John Clare, are now celebrated through their houses.

Although always independent, the Club was bound up with the life of the town. By the time of the first major celebrations for Shakespeare’s Birthday the Club numbered 200 members, including many burgesses and aldermen of the Corporation. When the Club refounded itself in 1874 the Mayor and his Deputy became the President and Vice-President of the Club and the tradition of the Mayor being President was only discontinued in 1941.

As we researched the book we realised that the club and its activities were not simply recreational but had a real impact on how the town developed, in particular how it came to be the world centre of Shakespeare performance and celebration that it is today. Its influence, as with the founding of the theatres, was often behind the scenes, but it was there nevertheless. This is why we often refer to the book as an alternative history of the town.

The Club’s archives, like so many other records relating to the town’s history, are cared for by the Shakespeare Birthplace Trust and the display of related materials will illustrate the activities of the Club over two centuries. These will include the magnificent glass goblet given to the Club in 1830 and a unique blue and white pottery tankard dating from the same period. Medals, books, minute books and other documents will be included. All these reinforce the role taken by the Club in the history of the town.

This is a rare opportunity to see these items on display together and to hear the authors talk about researching the subject. They will also be bringing along their own personal items of historic Club memorabilia. The meeting will take place at 3pm at the Wolfson Hall in the Shakespeare Centre, Henley Street, Stratford-upon-Avon on Monday 20 February. It is open to guests for £5, and copies of the book will also be available to buy for £12.99.