Bram and the Guv’nor: Henry Irving and his manager onstage together 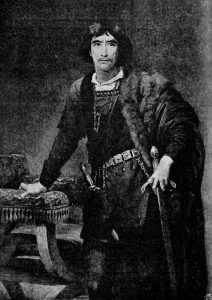 Through his novel Dracula and the numerous adaptations of it, writer Bram Stoker is probably now better known than the man who was his “Guv’nor”, the great late-Victorian actor Henry Irving. The two men had a working relationship that lasted almost thirty years, during which time Bram was Irving’s business manager at the Lyceum Theatre in London. Although Irving performed a wide range of plays, it was Shakespeare that was the heart of his career, and it had been Shakespeare that brought them together.

This week the relationship is being dramatised in a play, Bram and the Guv’nor, specially written by playwright Jefny Ashcroft and inspired by the Bram Stoker Collection which is cared for by the Shakespeare Birthplace Trust on behalf of the Royal Shakespeare Company. Bram Stoker was a compulsive collector, and the Bram Stoker Collection consists of many boxes of material that he kept relating to the career of Henry Irving encompassing his work at the Lyceum Theatre and many tours. The play is part of the Arts Friendly Archives project funded by Arts Council England that brings people into contact with archive material by creating fact-based dramas. It’s a fascinating approach, that will be even more special because before and after the performances audiences will be able to view an accompanying exhibition of the original material that inspired it. Even better, tickets are free.

Bram Stoker and Henry Irving met in 1876 when, as a young civil servant who wrote short stories and theatre reviews on the side, Stoker went to see Irving’s Hamlet in Dublin. Impressed by his review, Irving invited Stoker to dinner and later treated him to a private reading. Later Stoker wrote “So great was the magnetism of his genius, so profound was the sense of his dominancy that I sat spellbound. Outwardly I was as of stone…The whole thing was new, re-created by a force of passion which was like a new power.” 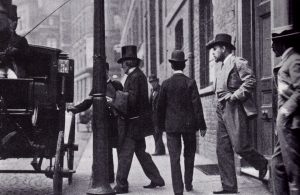 One of the few photos of Henry Irving (in the top hat) and Bram Stoker (a few steps behind), leaving the Lyceum Theatre

So began one of the most extraordinary of theatrical partnerships, explored by Michael Kilgarriff of the Irving Society here. He describes how “Irving provided the star power and the driving force, Bram a bottomless well of loyalty and the administrative capability to keep the show on the road.” Bram was also “genial, the ideal Front-of-House meeter and greeter”, and some of the most intriguing items in the Bram Stoker Collection are hand-written seating plans for dinners hosted by himself and Irving. The Collection contains lots of printed material relating to performances including reviews, programmes and illustrations, but these little scraps are particularly telling. Stoker obviously took considerable care to place people around the table, these dinners being the places where business was done and plans made. Together he and Irving were what Kilgarriff calls “a matchless team”.

The Bram Stoker Collection contains little personal material, and, disappointingly for Dracula fans, hardly anything relating to Stoker’s most famous creation. There has been much speculation, though, about whether Irving’s stage presence as Faust was the inspiration for Count Dracula. It is not surprising that Jefny Ashcroft has chosen to focus on the writing of Dracula and the effect that it may have had on the relationship of the two men. This extract comes from the press release: 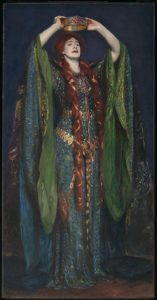 “the play is set in 1897 and showcases Bram’s career as a business manager to Sir Henry Irving (played by Barrie Palmer), acclaimed actor-manager of London’s Lyceum Theatre. Irving, also known as the Guv’nor, was the doyen of the Victorian stage particularly applauded for his Shakespearian roles and performed alongside his leading lady, Ellen Terry (played by Jo Price). Unbeknown to them, Bram (played by David Reakes) is also writing a strange new book, Dracula and attempts to persuade Henry Irving, who he idolises, to play Count Dracula. But all is not what it seems, as friendship and professional pride come into conflict and sparks fly. “

By 1897 Irving had passed the peak of his success. With his leading lady Ellen Terry he had performed many of Shakespeare’s greatest plays including Hamlet, Macbeth, King Lear, King Henry VIII, The Merchant of Venice and Much Ado About Nothing. He had made acting respectable, was favoured by Queen Victoria, and in 1895 was the first actor to receive a knighthood. Although Bram Stoker always remained out of the spotlight his talent was occasionally recognised. In 1888, on tour, the Chicago Daily News wrote ‘We know of no manager more vigilant, more indefatigable, more audacious than he. He knows how to make friends, how to keep them, and how to utilize them… In the manipulation of Mr Irving’s intricate and enormous business he exhibits a coolness, a shrewdness, and an enthusiasm that are simply masterful…Irving is fortunate in having so able and so loyal an associate.’

Bram and the Guv’nor is great opportunity to explore the relationship between these two extraordinary characters. Performances, lasting an hour, are free but people are asked to order tickets in advance. There are performances on 16, 17 and 20 May at the Shakespeare Centre in Stratford-upon-Avon.