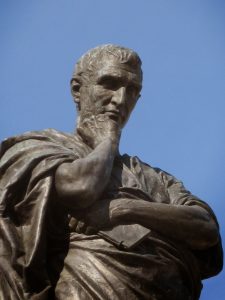 Statue of Ovid in Romania

2017 marks the 2000th anniversary of the death of the Roman writer Ovid, whose  Metamorphoses has continued to be one of the most influential of literary works.

As Shakespeare’s favourite writer, the RSC, and its current Artistic Director Gregory Doran in particular, have long championed Ovid’s work. His influence can be seen in the plots of his plays, in the allusions within them, and often in the language itself. Ovid continues to inspire creative artists today, but Ovid himself, and the stories he wrote, are in danger of being forgotten. As Doran has said: But today, some of those fantastical stories are being forgotten and our appreciation of Shakespeare’s plays will be lessened if that happens.  Who was Proserpina, and why did she “let her flowers fall”? What happened when glistering Phaeton lost the manage of his father’s chariot? And why was Niobe “all tears“.

Ovid’s fame can be seen in surviving books like the fifteenth century manuscript in French, now at the British Library, that illustrates the powerful scene in which Thisbe, finding Pyramus dead, stabs herself. This moment is dramatised by the mechanicals in A Midsummer Night’s Dream.

I’ve written before about some of the references to Ovid in Shakespeare’s work, but how did his work come to influence Shakespeare, and what was it  that affected him so deeply? 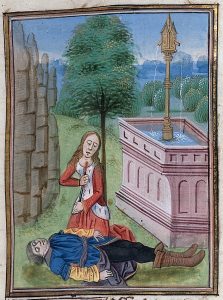 The death of Thisbe in the BL’s 15th century manuscript

In his book In Search of Shakespeare, historian Michael Wood notes that Shakespeare’s play Titus Andronicus “contains one of those throwaway remarks that he seems to put in for no apparent reason”, when a young boy brings a copy of Metamorphoses on stage and comments “my mother gave it me”. It’s a tantalising thought that Shakespeare could have been placing a reference to his own mother’s gift of this much-loved book inside the play. It may be wishful thinking, but it is pretty certain that Shakespeare first encountered Ovid as a child. Michael Wood notes that, assuming Stratford’s curriculum was similar to other grammar schools, he would have begun to read his stories aged about nine. He also quotes the French philosopher Michel Montaigne who recalled how “the first taste or feeling I had of bookes, was of the pleasure I took in reading the fables of Ovid’s Metamorphosies; for being but seven or eight years old, I would steale and sequester myselfe from all other delights, only to read them”.

Edgar Innes Fripp’s 1938 two-volume book Shakespeare, Man and Artist, although old-fashioned, is still a great read. He describes the delights of the Metamorphoses: “Here was a young poet’s treasury, Nature, mountains, sunshine and moonshine, flowers, woods, caves, pools, seas, storms, spirits, gods and goddesses, fairies, nymphs, lovers, shepherds, maidens, the music of the pipe and the lyre, hunting, bathing, centaurs, warriors, fighting, dragons, witches, Hades, horrors, magic, wonders, transformations and transmigrations of souls and of human beings into beasts and birds”. Michael Wood notes that today’s children are still captivated by the wonderfully imaginative worlds of Harry Potter, Narnia and The Lord of the Rings, as well as, Philip Pullman’s Dark Materials trilogy.

Ovid’s pagan tales were allegorical: one thing could stand in for another, or be turned into another. He celebrated change, and nature as the great creator. His stories allowed the reader’s imagination to fly free, unlike the literal readings of the Bible that were drummed into people at church. Here Ovid’s explains his view of the world:
The elements themselves do not endure;
Examine how they change and learn from me…
Nothing retains its form; new shapes from old
Nature, the great inventor, ceaselessly
Contrives.

Shakespeare seized on these ideas, showing us in play after play things that are not what they seem, that we are beguiled by illusions, and that nature is careless and unpredictable.

Edgar Fripp, like Michael Wood, hoped to find a direct link between Shakespeare and Ovid. In his book he described the Bodleian Library’s 1502 copy of the work, in Latin as “one of the treasures of the Bodleian”. Why? Because it contains an abbreviated Shakespeare signature, and opposite is a handwritten note “This little Booke of Ovid was given to me by W Hall who sayd it was once Will. Shakesperes. T.N.1682.  No longer mentioned as one of the Library’s treasures, it has, along with several other similar signatures in books, been accepted as a forgery, and become merely a curiosity. 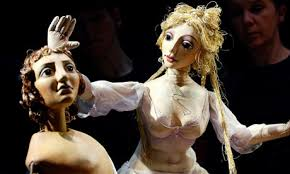 Adonis with Venus from the RSC’s puppet version, 2004

Celebrations of Ovid get under way with a revival of Gregory Doran’s puppet version of Shakespeare’s Venus and Adonis, from 26 July to 4 August. This much-admired production was first staged in 2004 and is a great introduction both to the poem and to Ovid’s ideas. For three weeks in October the RSC is putting on a series of Ovid-related events. Many are intended to introduce the stories to children, but there are also events for adults such as a reading from Ted Hughes’ adaptation Tales from Ovid.

Because of the brilliance of the BBC’s services, it’s still possible to find out more with an edition of In Our Time on Metamorphoses, and a 2017 radio documentary Ovid in Changing Times.

2 Responses to Celebrating Ovid 2000 years on