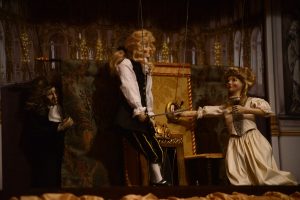 Photographs taken during the puppet performance of “Der Berstraffe Brudermord” by The Hidden Room theatre company on the fourth day of the Blackfriars Conference at the Blackfriars Playhouse in Staunton, Virginia on Saturday, October 26, 2013.
Photo by Pat Jarrett

There are many unanswered questions regarding Shakespeare’s plays, many of which relate to Hamlet, Shakespeare’s best-known play. The German Der Bestrafte Brudemord, known in English as Fratricide Punished, is one of the earliest known versions of Hamlet in a foreign language. The play was published in Germany in 1781 but the text itself dated from 1710, years before a proper translation had been made. Rather typically the original text has since vanished. It was translated into English in 1865.

At only a fifth the length of the original play it has often puzzled academics. Tiffany Stern writes “It tells an exaggerated, action-filled version of the story of Shakespeare’s Hamlet that is often hilarious. The Ghost of Hamlet’s father sneaks behind the sentries to box their ears;… Hamlet rids himself of two murderers by asking them to shoot him at the same time. He ducks and they shoot one another instead.”

Most of the philosophical musings of Shakespeare’s play have been ditched along with the poetry. You’ll remember that the death of Ophelia is announced by Gertrude in one of the most memorable speeches in Hamlet. Not here:

Queen:  Gracious Lord and King, I am the bearer of sad tidings.
King:  Heaven forbid; what is it?
Queen: Ophelia has climbed a high hill, and cast herself down and taken her own life.

This might not seem to owe much to Shakespeare’s play, but here is Claudius’s first speech, even in translation sounding much more familiar:

King:  Though yet our brother’s death is fresh in memory of all and it befits us to suspend all state-celebrations, yet from this time it is needful for us to change our black mourning garb to crimson, purple, and scarlet, since my late departed brother’s widow has now become our dearest spouse. Wherefore I pray you, let everyone show himself joyful and make himself a partner in our mirth. But you, Prince Hamlet, pray you, be happy. See here your mother, how sad and troubled she is by your melancholy. Also we have learned that you have resolved to go back to Wittenberg. For the sake of your mother, do not do so. Stay here, for we love you and like to see you, and should not wish any harm to overtake you. Stay with us at court, or, if not, betake yourself to Norway, to your kingdom.

Tiffany Stern again: “What is this slapstick bawdy romp of a Shakespeare tragedy? And how did it come about? For years Shakespeareans have been confused by ‘Der Bestrafte Brudermord’. Is it a unique record of the play preceding Shakespeare’s Hamlet? A corrupt version of Shakespeare’s play? An adaptation?”

There is thought to have been a lost version of Hamlet that was a source of Shakespeare’s play. This is known as the “ur-Hamlet” and Fratricide Punished was closely examined as it might relate to this early play. The first known performance of Hamlet in Germany was put on by English actors in 1626, which might account for an early version being found there. 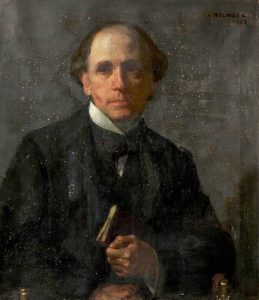 As a text clearly written for performance there have been a number of explanatory productions in England. The earliest was put on by the pioneering director William Poel on 11 October 1924. Poel had founded the Elizabethan Stage Society in 1895 in order to re-create original staging conditions, and even before this date, in 1881, he had staged Hamlet using the First Quarto text with minimal scenery and props. With a number of “Globe” theatres now operating around the world it’s perhaps hard for us to imagine how daring this was but in his own time Poel was extremely influential.

More recently academics have been looking at the play with renewed interest. I’ve already mentioned Tiffany Stern’s 2014 paper, followed by a lecture at the Britgrad Conference in 2105. From that 2014 paper she explains her continuing interest: “Yet what gave me pause was a stranded marionette now residing in The Collection of Zanella-Pasqualini, Bologna. Called “Amleto”,this Hamlet puppet was apparently carved by Pietro Resoniero (1640-1735) for performance in the Judenmarkt, Vienna, in 1667. That means that a puppet Hamlet did indeed circulate abroad before the play was formally translated.”

Her talk was followed by a puppet version of Fratricide Punished by Hidden Room Theatre, whose director Beth Burns is convinced that the play was intended to be a puppet show. The version has also been put on in different venues, but the idea remains controversial as June Schlueter has written a more cautious article noting that there is a lack of documentary evidence for performance of puppet-plays on the Continent. So more research into this very Shakespearean puzzle is required.