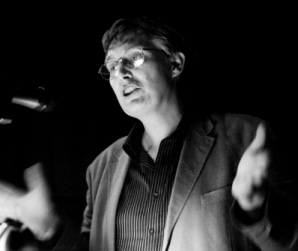 Following on from my post about the MOOC that began 23 October 2017, I’ve only just discovered a relatively new site that reproduces lots of material relating to going to the theatre, put together by the British Library’s prolific Lead Curator of News and Moving Image, Luke McKernan.

Entitled Theatregoing, here is Luke’s description of what the site does:

“The aim of this site is to document the experience of going to the theatre. It does this by gathering eyewitness testimony from diaries, letters, blogs, newspaper articles, memoirs, reports, travel books, pamphlets, histories, photographs and illustrations. By ‘theatre’ is meant all forms of live theatrical performance: stage plays, opera, musicals, concerts, dance, music hall, variety and more. The interest is not in formal reviews (though there are some of these) but rather in informal documents that document the audience’s particular engagement with theatregoing.”

What I particularly like about this approach is that he brings to the fore descriptions often written by ordinary people, not just professional critics. There are links to online versions if they exist and “no distinction or qualification is made about the form of the memory recorded. All written records, and all memories, are subjective”.

Inevitably many of the reports are for Shakespeare productions, including the famous writings of Thomas Platter and Samuel Pepys. Here is Pepys’ judgement from 1662 on what is now one of Shakespeare’s best-loved comedies:

I sent for some dinner and there dined, Mrs. Margaret Pen being by, to whom I had spoke to go along with us to a play this afternoon, and then to the King’s Theatre, where we saw “Midsummer’s Night’s Dream,” which I had never seen before, nor shall ever again, for it is the most insipid ridiculous play that ever I saw in my life. I saw, I confess, some good dancing and some handsome women, which was all my pleasure. 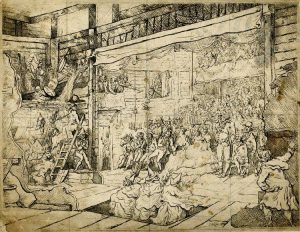 A country theatre, 1790, from the British Library

The site includes lots of material I haven’t encountered before. Here’s an extract from a record of a performance of The Merchant of Venice staged in some kind of put-up theatre in Keswick in 1792, written by Joseph Budworth and reproduced in his book A Fortnight’s Ramble to the Lakes in Westmoreland, Lancashire, and Cumberland (full details are on the website):

In the evening we went to see the Merchant of Venice in an unroofed house. The sky was visible through niches of boards laid across the upper beams. The walls were decorated, or rather hid, with cast-off scenes, which shewed in many places a rough unplastered wall. Some of the actors performed very well, and some very middling. Their poverty shall stop the pen of criticism; and their endeavours were well expressed by their motto – “TO PLEASE.”

Between the acts a boy, seated upon an old rush chair in one corner of the stage, struck up a scrape of a fiddle. By his dress, which was once a livery, we suppose he was a servant of all work, and had belonged to the manager in better days. But I must do Shylock the justice to say, he performed well; and although no person bawled out “this is the Jew that Shakspeare drew,” when he was expressing his satisfaction at Antonio’s misfortunes, a little girl in the gallery roared, “O mammy! mammy! what a sad wicked fellar that man is!”

It’s interesting to see how often these descriptions talk about other members of the audience and their reactions, as well as subjects don’t have much to do with the play.  Some of them, like Thomas Platter’s writings, have provided us with lots of information about what Shakespeare’s theatre was like. This entertaining site is regularly updated and very much worth signing up for. While you’re at it do take a look at Luke’s companion blog, Picturegoing, that does the same thing for film history. You’ll find a link from the About page of Theatregoing.

This entry was posted in Legacy, Shakespeare on Stage and tagged British Library, Luke McKernan, performance, Theatregoing. Bookmark the permalink.

3 Responses to Theatregoing with Luke McKernan