In Remembrance of Richard Spender 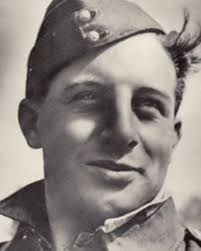 Had Shakespeare died at the age of 21 we would all be the poorer. He would never have written anything of note: without knowing it, we would have lost his insights into human life, expressed in unrivalled poetry through vivid characters and situations. The sense of loss for young lives unfulfilled is always felt most sharply in November, when we honour those whose lives have been cut short by war, and this year in Stratford-upon-Avon it has been a particularly vivid remembrance weekend.

In March 1943 the young soldier Richard Spender died in action in North Africa. He was 21, and was beginning to make his mark as a poet. Because he died so young it’s impossible to say how successful he might have been, but there are enough clues in what he wrote to be sure that he would have been a writer of note. Spender came to live in Stratford-upon-Avon as a child and from 1930 to 1940 he studied at King Edward VI School, where Shakespeare had been a pupil. The School has now honoured Richard Spender with a brand new building that houses the school library and both the English and Computer Studies Departments. Also last week a collection of his poems together with a biography was published, altogether offering a fitting and permanent recognition. * 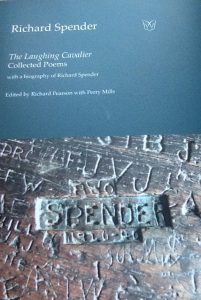 Over the last few days I’ve been reading the book, enjoying the poetry and finding out more about Richard Spender’s short but eventful life. He was a charismatic, charming young man, hence his nickname “The Laughing Cavalier”. He became Captain of the School, and was gifted academically: in 1940 he could have gone to the University of Oxford to read History, but chose to enlist in the army instead.

Some of his poems were published during his lifetime in prestigious periodicals including the Times Literary Supplement and The Observer. Many of the poems, though, are published for the first time. They bear witness to his love of the school and of the town and surrounding countryside: rowing on the Avon was a favourite pastime and the river often finds its way into his poems. This is part of River:
The river moves beneath a breath
Of mists that swirl and whirl and eddy
In currents of a faery book.

Dark descends, and the trees retreat into the pillow of the soft black night.
Banks fade within the breathing silence
And the river is a long glass road
Cutting the velvet of the sleeping fields
And chuckling elfishly beneath the boat.

The river too is central to a 1942 poem, The Happy Pain where he writes yearningly for peace in a world of war, even the peace of death.
I shall not know
The clouds of death that creep
In numbing suffocation slow
Over a stifled, palsied brain,
But I shall be with you and sleep
Beneath the willow trees again,
And breathe the peace the river bears,
The peace the river bears, and you.

And in the second part of Embarkation Leave he writes about Big School, the ancient schoolroom which is still in use today.
Amid the silence and the coolness of this roof,
Where the hewn beams meet upon the plaster’s white
Like fingers raised in prayer – somewhere here
Watch the spirits of a host of wise and daring men.
I stood in this music-filled stillness –
Eternity stole from the warehouse of Time –
Hearing in the distance the stamping runs and shouts
Of boys playing. I heard grave voices speak.
They have taken me by the hand and led me;

They have strengthened my heart and made it see a Truth
Which, yesterday, my eyes were feared to look upon.

Until the end of 2017 an exhibition celebrating Spender’s life is being held in Shakespeare’s Schoolroom and Guildhall, including some of his original notebooks. 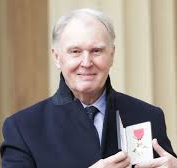 At the opening of the Richard Spender Building the new Library was also opened. This has been named after another formed Head Boy of the School, Tim Pigott-Smith, who died in April 2017. One of the leading actors of his generation, Tim attended the school from 1962 and 1964 and like Richard Spender remained in close contact with it. In 2013 he performed in their production of Henry V that celebrated a production of the play staged exactly 100 years before, just before the outbreak of the 1914-18 war. In this project the school has successfully made connections between several of its old boys, united as headmaster Bennet Carr has said, by “a common passion for the English language”. It has also shown the school’s extraordinary determination to celebrate its history and the achievements of its students, past, present and future.

For in this happy place is no brown winter leaf, no fallen petal.
Nothing but wild beauty in the flowers of youth.