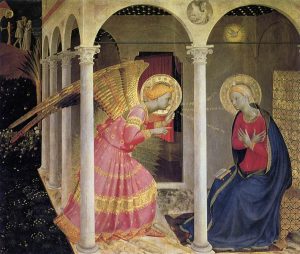 Angels have been part of the Christmas story ever since it was told in St Luke’s Gospel where the Angel Gabriel appeared to Mary at the Annunciation, and where angels appeared to the shepherds to tell them of the birth of Christ. These beautiful winged messengers from heaven have also been favourites when it has come to creating religious images and even in our secular society our Christmas cards and trees are decorated with angels.

A few weeks ago I came across illustrations of paintings in the church in Mulcheney, Somerset. They date back to the 1600s, well after the Reformation but still at a time when painted images in churches were frowned on. These paintings that cover the wooden ceiling of the church depict angels dressed in Tudor costume. They are rare, beautiful survivors.

Shakespeare often referred to angels as beautiful creatures from heaven who also protect humans, as in Hamlet where the prince, on seeing the ghost for the first time, cries “Angels and ministers of grace defend us!”

In the balcony scene, Romeo addresses Juliet, then describes how people look up to admire the beauty of an angel just as they would have looked at the angels flying on the ceiling of the church. 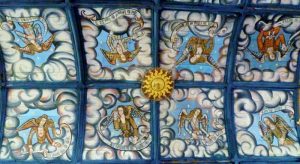 The angels on the ceiling of Mulcheney Church

O, speak again, bright angel! for thou art
As glorious to this night, being o’er my head
As is a winged messenger of heaven
Unto the white-upturned wondering eyes
Of mortals that fall back to gaze on him
When he bestrides the lazy-pacing clouds
And sails upon the bosom of the air.

Mulcheny is not alone though and I have been looking around for other examples of painted churches, especially where they feature angels. This website contains a free list of painted churches in the UK, though it is not comprehensive. Roger Rosewell’s book Medieval Wall Paintings in English and Welsh Churches lists around 500 churches with some surviving wall paintings, some from as early as the twelfth century. It’s surprising that any still exist, since many were painted over in the sixteenth century as a result of the Reformation, and many churches have been altered, rebuilt or renovated in the intervening centuries.

The inside of St Botolph’s Church in Hardham, West Sussex is almost completely covered in medieval paintings. Above the chancel arch is the Lamb of God, surrounded by angels. Among the most notable are scenes showing the nativity, one depicting the Virgin lying in a four-poster bed and the other a more conventional view of Christ lying in a manger with an ox and ass behind him. 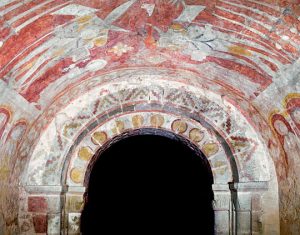 St Mary’s Church in Kempley, in Gloucestershire, contains some 12th century paintings including those of the Last Judgement. On the ceiling Christ sits on a rainbow, adored by winged angels while the Virgin Mary and St Peter stand by. This church has remained relatively untouched because of its isolated location, but the paintings did not escape being whitewashed following the Reformation. They were discovered in the twentieth century and have now been restored.

Over in Wales another isolated church that has recently discovered its wall paintings is St Cadoc’s in Llancarfan in the Vale of Glamorgan. In 2013 conservators uncovered fifteenth century paintings depicting the seven deadly sins and a spectacular tableau of St George and the Dragon. These too had been concealed behind limewash for hundreds of years. Restoration has taken nearly five years but now the images are visible again.

This was also the fate of the wall paintings in the Guild Chapel in Stratford-upon-Avon, also showing the Last Judgement, though from a later date, and there are few representations of angels. They were discovered in the early nineteenth century and the methods used to preserve in fact obscured them further. As part of a project to conserve these paintings a number of others have been revealed behind wood panelling, believed to have been installed in the fifteenth century. This project will then reveal paintings that were already hidden in Shakespeare’s time.

Whether these churches feature the Christmas story and its angels or not, over Christmas these beautiful survivors from long ago are sure to be admired and cherished.

This entry was posted in Legacy and tagged angels, Guild Chapel, Reformation, Romeo and Juliet, wall paintings. Bookmark the permalink.