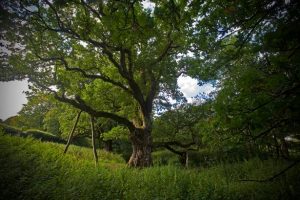 I’ve only just caught up with the story of the real Birnam Wood. Birnam Wood in Scotland dates back to medieval times, but now just two trees survive: the Birnam Oak, which is thought to date back around 500 years so would have been there when Shakespeare was alive, and the Birnam Sycamore, about 300 years old.

The oak was already vulnerable but Storm Desmond in December 2015 caused flooding that submerged the base of the oak in several feet of water. It is now in danger of splitting in two under its own weight, and remedial work is needed to support its branches.

From its very first mention in the play, Birnam Wood is no ordinary forest, but one of the play’s supernatural elements. When Macbeth visits the weird sisters to find out about his future they predict:
Macbeth shall never vanquish’d be until
Great Birnam wood to high Dunsinane hill
Shall come against him.

He responds:
That will never be
Who can impress the forest, bid the tree
Unfix his earth-bound root?

Macbeth holds on to their prediction when it becomes obvious an army is approaching:
I will not be afraid of death and bane,
Till Birnam forest come to Dunsinane.

Then the messenger brings the impossible news:
As I did stand my watch upon the hill,
I look’d toward Birnam, and anon, methought,
The wood began to move.

It’s a shattering moment for Macbeth. The audience, though, already knows. Shakespeare has carefully prepared them, reminding them more than once of the weird sisters’ prophecy. As Malcolm and his army close in on Macbeth’s stronghold at Dunsinane the commanders talk about what to do in order to conceal the size of their forces: 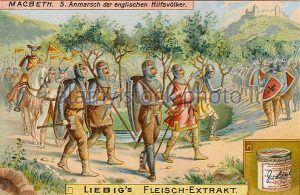 A German representation of the Birnam Wood scene

Siward: What wood is this before us?
Menteith: The wood of Birnam.
Malcolm: let every soldier hew him down a bough
And bear’t before him: thereby shall we shadow
The numbers of our host and make discovery
Err in report of us.

No wonder the remains of Birnam Wood have such a hold on the imagination: the magic, that the trees did unfix their earth-bound roots, actually seemed to happen.

This story has been in the news because the RSC has had to withdraw its support for conserving the remaining trees but hopefully this seemingly negative event will lead to greater publicity for the project. To find out and donate click here!