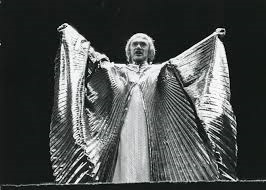 In the days since his death on 18 January 2018, tributes have flooded in for theatre director John Barton. He was invited to help form the RSC by Peter Hall in the early sixties and both were hugely influential. While Hall’s flair was for management, Barton was a brilliant teacher who helped generations of actors not to be frightened of Shakespeare’s text.

Barton’s productions tended to look simple and undecorated, with timeless period settings and striking visual motifs that emerged from the text itself. The dazzling golden cloak used in Richard II came from the line “Down, down I come; like glistering Phaethon”, and in Hamlet the mask held by the players was taken up by the prince as he examined his own thoughts and motives. Most powerful was the image, in his Richard II, of the King and Bolingbroke holding the crown between them, looking at each other as if they were reflections, an image repeated when Richard is in prison.

Give me the crown.
Here, cousin, seize the crown; Here cousin:
On this side my hand, and on that side yours.
Now is this golden crown like a deep well
That owes two buckets, filling one another,
The emptier ever dancing in the air,
The other down, unseen and full of water:

The two actors who played the role alternately took on the role of monarch, symbolised by the crown, the central image of Barton’s recital programme The Hollow Crown, which has been performed hundreds of times around the world by many different actors. The title comes from Richard II, again, where Richard makes a parallel between King, and being an actor: 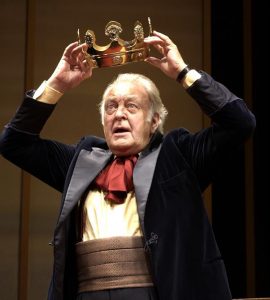 For God’s sake, let us sit upon the ground
And tell sad stories of the death of kings;
How some have been deposed; some slain in war,
Some haunted by the ghosts they have deposed;
Some poison’d by their wives: some sleeping kill’d;
All murder’d: for within the hollow crown
That rounds the mortal temples of a king
Keeps Death his court and there the antic sits,
Scoffing his state and grinning at his pomp,
Allowing him a breath, a little scene.

Barton’s work is probably best known, though, through his TV series Playing Shakespeare, now to be found on YouTube. In the videos, concentration is on the actors, but in the book that reproduces the text and includes extra material, it’s Barton’s voice that dominates. Here are a few quotes: 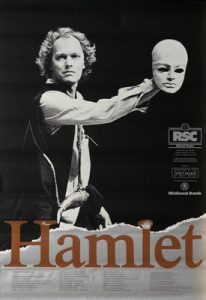 “Many actors, particularly if they’re not familiar with Shakespeare, very understandably look at the verse as some kind of threat…. But no, it’s there to help the actor. It’s full of little hints from Shakespeare about how to act a given speech or scene. It’s stage direction in shorthand” p25

“If he can find his way through it and make friends with the text [an actor] will become, not bound, but more free… Playing Shakespeare is at bottom to do with playing with words… If the actor enjoys the word games, the audience will enjoy them too. P117

So what have we been trying to prove? Simply that the clues in the text are much richer and more numerous than at first appears…. If the textual points are ignored, then its’s pretty certain that Shakespeare’s intentions will be ignored also or at least twisted. Shakespeare is his text.” p167

He even put his golden rules into blank verse:

We’ve talked of possibilities, not rules,
Of questions, balances, not absolutes.
So are there any rules? Yes. Try to find
What goes on in the text and ask yourselves
If you can use it. You must not reject it
Until you’ve smelt it out and asked the questions.
Never forget the verse is there to help you.
It can be heightened, and yet very often
It’s closer to our own humdrum human speech.
Which of you noticed while I have been talking
That what I’ve just said was in bad blank verse?  p209

Later in 2018 Gregory Doran is directing Barton’s favourite play, Troilus and Cressida,   dedicating the production to him. It obsessed him so much that he directed it three times for the RSC: in 1960, 1969 and 1976. Perhaps he felt there was always more to uncover in this knotty play.

In Playing Shakespeare, Barton highlights the important word Time. At the end of the book he quotes Act 4 Scene 5 of the play, where Ulysses and Hector observe the walls of Troy, the semi-mythical city that dominated the imaginations of Shakespeare and his contemporaries. Here it is, in memory of John Barton himself:

Hector: Here they stand yet; and modestly I think
The fall of every Phrygian stone will cost
A drop of Grecian blood. The end crowns all,
And that old common arbitrator, Time,
Will one day end it.
Ulysses:                       So to him we leave it.