Shakespeare and the monarchy

The BBC is currently running a Royal Collection season, focusing on the million or so objects owned by British royalty. Many are priceless artefacts, but the Collection also includes objects with extraordinary symbolic and cultural value to the nation. Some also tell very personal stories about the people who have been our kings and queens.

As one of the leaders of the most prestigious theatrical companies of the day, Shakespeare was able to observe two monarchs at close quarters. Both Elizabeth 1 and James 1 enjoyed plays and performances took place in the royal palaces. After Queen Elizabeth’s death in March 1603, James 1 made his way from Scotland to London. In May he issued a patent for a new King’s Company, including Shakespeare, Burbage, Hemmings and Condell, for them to perform “as well for the recreation of our loving Subjectes, as for our Solace and pleasure when wee shall thincke good to see them”. His coronation in Westminster Abbey was not held until 25 July and the ceremonial procession through London was delayed until the following year because of an outbreak of plague. The King’s Men were issued with scarlet cloth from which outfits were made so they could walk in the royal procession. It’s tempting to think that Shakespeare and his fellow players might also have attended the coronation itself, with all its pomp and ceremony. If so they might have seen one of the most famous of jewels, the Black Prince’s Ruby, said to have been worn by Henry V at Agincourt, adorning St Edward’s Crown that is worn only for the coronation itself. While some of the jewels still exist, the crown itself was melted down at the end of the Civil War for its gold and a new crown was made for the coronation of Charles II when he returned to take the throne, an event that took place, incidentally, on Shakespeare’s birthday 1661. Charles understood only too well the importance of those symbols of power, the crown, the sceptre and the orb. 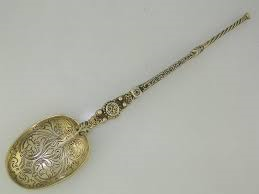 The only part of the Crown Jewels that remains intact from Shakespeare’s time is the Coronation Spoon. Made in the twelfth century it is recorded in an inventory of royal regalia in 1349 and was known to have been used in James 1’s coronation. It might look insignificant but the spoon is used for the anointing of the new sovereign with holy oil, a ritual so secret it is concealed from view under a canopy.

While he was able to observe monarchy more closely after James’s accession, Shakespeare had already written his plays that cover the Wars of the Roses and the whole period up to beginning of the Tudor dynasty. Between 1591 and 1599 he had written eight plays that examined the awfulness of civil war, the importance of good government and the need to avoid discord. In between, he had written some of his most successful comedies such as A Midsummer Night’s Dream and Much Ado About Nothing. 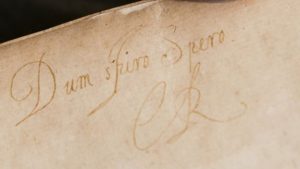 Inscription by Charles 1 in his Second Folio

A further connection between Shakespeare and monarchy featured in the first episode of Andrew Graham-Dixon’s TV series Art, Passion and Power: the Story of the Royal Collection, being screened in 2018. Much of the programme looked at Charles 1, described as “the greatest royal collector in British history”. As well as commissioning items that related to his divine right to rule Charles collected things that he really valued, and one of these is a copy of the 1632 Second Folio of Shakespeare’s plays. His affection for them is apparent because he wrote in the book. On the contents list he noted his favourite characters next to the play in which they appear: Benedick and Beatrice, Pyramus and Thisbe, Malvolio. And on the first page he wrote his personal motto, “Dum Spiro, Spero”, “While I Breathe, I Hope”. What makes these inscriptions so poignant is that Charles wrote them while imprisoned on the Isle of Wight in 1648, awaiting his trial for high treason which would lead to his execution. Instead of finding parallels with the doomed Richard II, Charles found relief in the comedies. Stratfordians might remember that the book was borrowed by the Shakespeare Birthplace Trust from the Royal Collection for an exhibition at New Place about 12 years ago. It was also exhibited at Windsor in 2016, and this link leads to an account of it. 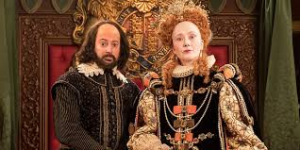 For something completely different, there is still just time to catch an irreverent look at Shakespeare and royalty: The Upstart Crow Christmas special is available on IPlayer until 24 January. Shakespeare’s promise of a quiet family Christmas proves impossible. His company of players have been commanded to perform Will’s new play in front of Queen Elizabeth herself. He’s having trouble with the play, not least the title, Eighth Night, and worse, he has to give the Queen a suitable gift for Christmas. His expensive necklace (that might have ended up in the Royal Collection) goes missing. How will the great poet find an acceptable present for the Queen? With Elizabeth played by the wonderful Emma Thompson it’s a real treat so don’t miss it.