Hamlets onstage then and now 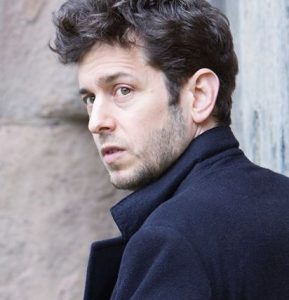 This week David Ricardo-Pearce has joined the mighty list of actors who have taken on Shakespeare’s most famous part, Hamlet. Until 10 March 2018 he’s playing the role at the Octagon Theatre in Bolton where they are celebrating the fiftieth anniversary of the Octagon. Director David Thacker says “ “I’d like our production to allow Hamlet to speak afresh for people who have seen the play many times before and be a compelling and thrilling experience for the many people who have never seen it. “ That’s always a big challenge for any production.

Elsewhere the Royal Shakespeare Company’s tried and tested production of Hamlet is on tour and will be playing in Newcastle-upon-Tyne shortly. The production features Paapa Essiedu as the Prince who, when the production opened in 2016, was immediately hailed as a rising star.

Hamlet is rightly seen as a young man’s play, and relatively inexperienced actors can be a revelation in the role. Performances by great actors, honed over many years, can also continue to impress. The Theatregoing website reproduces reports in which members of the audience have documented their theatre experiences, and recently they reproduced a wonderful report of David Garrick’s playing of Hamlet. He performed it for decades, and it’s known that he introduced some tricks into the performance such as a wig that could move so that in the ghost scene Hamlet’s hair could appear to stand on end. The report was written as two letters by Georg Christoph Lichtenberg after seeing Garrick’s performance in December 1774. The letters were published in 1776 and translated and published in English in 1885. Lichtenberg was greatly affected by the performance, and I have for years admired his account.  It is very pleasing to be able to read the whole thing online. Lichtenberg not only describes Garrick’s performance, but the effect of it on the audience. We would find Garrick’s performance hammy and melodramatic, but he knew what would appeal to the audience of his own day. 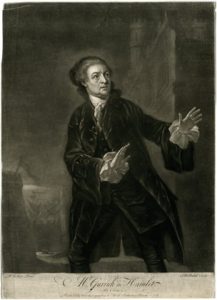 Here I’m focusing on the sections where he talks about the audience. For the scene in which the Ghost appeared to Hamlet, “The theatre is darkened, and the whole audience as still and the faces as motionless as if they had been painted on the walls of the house. At the extreme end of the theatre one might have heard a pin drop.” Garrick’s reaction to the ghost’s first appearance is well known. “There he remains standing, with legs far apart, but still in a graceful attitude, as if electrified, supported by his friends. His features express such horror that I felt a repeated shudder pass over me before he began to speak. The almost appalling silence of the assembly, which preceded this scene and made one feel scarcely safe in one’s seat, probably contributed not a little to the effect.” At the end of the scene” You may easily imagine what loud applause accompanies this exit. It begins as soon as the Ghost moves off, and lasts until Hamlet likewise disappears.”.

Every nuance of the delivery of the soliloquy “O that this too, too solid flesh would melt” was fully worked-out. At the end of the speech Lichtenberg reported “My neighbour and I, who had not yet exchanged a word, looked at each other and spoke. It was irresistible.” He returns to the unusual silence of the audience again: “he utters the words “To be or not to be” softly; but they are everywhere audible, on account of the great stillness, and not through the peculiar gift of the man, as some of the papers state.” Over many years Garrick had worked on every moment of the performance so that he could wring the audience’s emotions. 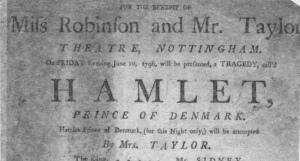 Mrs Taylor as Hamlet in Nottingham, 1796

Many actors have had a go at the part, even for a night or two, and presumably without any of the preparation Garrick gave it. Among them have been many women. The great tragic actress Sarah Siddons occasionally played the role while in the provinces, playing it in Birmingham and Manchester in 1776 and Liverpool in 1778. I’ve been on the lookout for unusual performances of Shakespeare while I’ve been working on the British Library’s playbill collection In the Spotlight. My favourite discovery so far is Mrs Taylor who on Friday 10 June 1796 took on the role for one night only at the Theatre in Nottingham, I know nothing else about this but maybe there’s an interesting story there somewhere. Siddons was not the only eighteenth century woman Hamlet but they were rare until well into the nineteenth century. Tony Howard’s book Women as Hamlet is a definitive guide to the subject.

People never seem to run out of things to say about Hamlet,  so you might have missed a terrific programme on Radio 4 in Melvyn Bragg’s series In Our Time in December 2017. As ever, there is a great line-up of experts including Jonathan Bate from the University of Oxford, Carol Rutter from the University of Warwick and Sonia Massai from King’s College London. Listen and enjoy.