Shakespeare and the strangers: Refugee Week 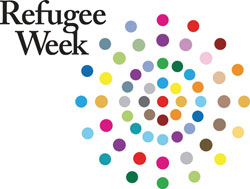 This week, 18-24 June 2018, has been Refugee Week in the UK . This is its twentieth year, timed to coincide with the worldwide Refugee Day, 20 June. The need to remember the plight of refugees is just as acute, if not more so, than it has ever been.

Refugee Week is a nationwide programme of arts, cultural and educational events that celebrate the contribution of refugees to the UK, and encourages a better understanding between communities.

Refugee Week started in 1998 as a direct reaction to hostility in the media and society in general towards refugees and asylum seekers. An established part of the UK’s cultural calendar, Refugee Week is now one of the leading national initiatives working to counter this negative climate, defending the importance of sanctuary and the benefits it can bring to both refugees and host communities.

One of Shakespeare’s collaborations was the play Sir Thomas More. Shakespeare was brought in to write a scene containing More’s persuasive speech pleading for his fellow Englishmen to be compassionate to refugees, referred to as “strangers”.

The speech contains the lines:

‘Imagine that you see the wretched strangers,
Their babies at their backs and their poor luggage,
Plodding to the ports and coasts for transportation.’

The events in Sir Thomas More took place in 1517, so were already well in the past when Shakespeare wrote the scene. But the argument was just as relevant to Shakespeare’s time as it is to our own. This year British Black and Asian Shakespeare, based at the University of Warwick, have collaborated in making a short film entitled The Stranger’s Case featuring an updated version of the scene. It’s a contemporary take, showing that Shakespeare’s thoughts and writings are as relevant today as ever. Do watch this powerful film that is now freely available on YouTube, even if you normally don’t like to see Shakespeare modernised.

The speech continues by asking the listener to put him or herself in the place of the refugee:

Say now the king
Should so much come too short of your great trespass
As but to banish you, whither would you go?
What country, by the nature of your error,
Should give you harbour? go you to France or Flanders,
To any German province, to Spain or Portugal,
Nay, any where that not adheres to England,
Why, you must needs be strangers: would you be pleased
To find a nation of such barbarous temper,
That, breaking out in hideous violence,
Would not afford you an abode on earth.

In London, Shakespeare’s Globe has been running events all week. Michelle Terry, Artistic Director of Shakespeare’s Globe, talks about the importance of the arts today in increasing sympathy for those who appear to be not like us:

“with knowledge and information at our fingertips, does the power of imagination and empathy have a place in our Global Community, and what collective responsibility do we have to use them, if they do?’

In many of Shakespeare’s plays people are displaced and left vulnerable, needing the assistance of others: think of Viola in Twelfth Night, the Antipholuses and Dromios of The Comedy of Errors, Pericles and his family, and Perdita in The Winter’s Tale.  Most of the Globe’s events have passed, but on the evening of 23 June there is to be a panel discussion at the Globe entitled “Whither would you go?”.

Shakespeare was asking us to imagine a world 400 years ago that is still too strikingly familiar today. It is our capacity to imagine that keeps us free, allows us to step into other worlds, others’ shoes, others’ lives – at its most basic, to empathise; at its boldest, to take action. This panel will use the context of theatre and art to connect to the themes of Refugee Week.

On the 24th there are more sessions including storytelling.  If you’re not able to get there but would like to find out more there are links to lots of material here.