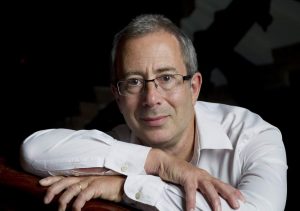 Shakespeare seems to have haunted writer Ben Elton. He was always hovering in the background during Blackadder 2, the superb Elizabethan TV series. His current sitcom Upstart Crow, based around Shakespeare’s plays and life,  has had three series and he’s now written a feature film, All is True, that examines Shakespeare’s retirement to Stratford. This interview with him was broadcast in December 2018 on Radio 4’s Front Row.

In it Elton explains that it was seeing one of Branagh’s films that really sparked his fascination with Shakespeare, and it was after Branagh had appeared in the Christmas Special of Upstart Crow that Elton was asked to write the script for All is True. It’s easy to see why: Elton’s love of wordplay and the exuberance with which he invents words and phrases is terribly rare, and reminiscent of Shakespeare’s own writing. A book containing some of the scripts is available  and you can still catch episodes of Upstart Crow on BBC Iplayer. 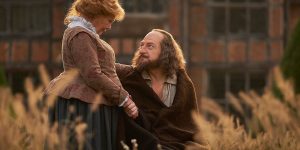 Judi Dench and Kenneth Branagh in All is True

I went to see All is True a few days ago and while I felt puzzled by it at first I’ve found myself thinking about it many times since. The mood is sombre, the pace slow. Everything about the film is thoughtful, deliberate, planned. It feels a world away from the charming nuttiness of Upstart Crow in which Shakespeare regularly rants about the inefficiency of the transport system.

Some have called the film Branagh’s vanity project, directing himself as Shakespeare after playing so many of his most compelling characters. But the Shakespeare Branagh plays is not the great creative writer, or the performer revelling in his fame, rather the man who goes home to face the reality of what really matters, his home and family.

It feels like a farewell, but with Branagh still in his 50s there is plenty for him still to do. His co-stars Ian McKellen and Judi Dench, as the Earl of Southampton and Anne Hathaway, also show no sign of stopping. McKellen this year is celebrating his 80th birthday with a year of touring to theatres up and down the country.

The film encourages us to think about the gap between life and art. The aging aristocrat the Earl of Southampton comments on the little life that Shakespeare has actually lived while writing his extraordinary poems and plays, and Shakespeare acknowledges that he has lived through his imagination sometimes at the expense of real life.

Without giving anything away about the plot, it’s the death of Shakespeare’s son Hamnet that dominates Shakespeare’s final years. While his wife and daughters had to cope with his loss Shakespeare carried on, Anne noting that he went straight off to write The Merry Wives of Windsor. In Upstart Crow Shakespeare’s rustic family, especially his father, can be a bit of an embarrassment to a man trying to prove himself. In All is True it’s Shakespeare himself who has to acknowledge he’s failed the people closest to him.

There are many issues unresolved in this dysfunctional family: Anne still resents her husband writing love poems to another woman, Susannah lives in a loveless marriage, and Judith has never got over being the less valued twin. Shakespeare’s way of resolving the loss of his son is to create a garden – another way of avoiding the conflicts within doors. We’re reminded that in the plays gardens are orderly, and outdoor scenes tend to be open and optimistic, while indoors can be claustrophobic and full of conflict.

Not everybody will enjoy this film, but I thought there was much to admire in it. The trailer is here, and an interview with Kenneth Branagh here. 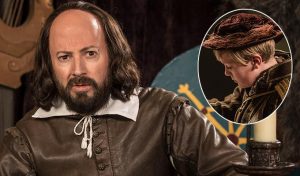 David Mitchell as Shakespeare with Hamnet in Upstart Crow

It’s a very different style for Ben Elton, but he’s always been able to blend comedy with serious stuff. The final scene of Blackadder with soldiers going over the top in World War 1 is probably his most famous. In the last episode of Series 3 of Upstart Crow, Elton also tackled the death of Hamnet and here too he moved from the comic into the tragic in just a few lines. Watching All is True, I wondered why we didn’t hear the lines from King John in which a parent mourns her child, but of course he’d already used it. There it is, the final moment of Upstart Crow, as William and Anne settle down by the fire together, the speech in which he did recognise the loss of his own precious child.

Grief fills the room up of my absent child,
Lies in his bed, walks up and down with me,
Puts on his pretty looks, repeats his words,
Remembers me of all his gracious parts,
Stuffs out his vacant garments with his form;
Then, have I reason to be fond of grief?

One Response to Ben Elton’s Shakespeares