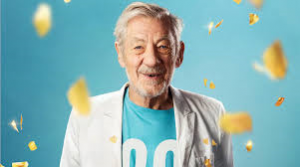 25 May 2019, the 80th birthday of Ian McKellen! I was recently lucky enough to catch his one-man show Ian McKellen on Stage at the Belgrade Theatre in Coventry. He’s performing this show up and down the country for most of the year, a feat that would exhaust a much younger person. In Coventry he had originally expected to perform twice, on the evenings of Friday and Saturday, but decided to fit in a matinee on the Saturday as well. That was the performance I attended, and he appeared to be thoroughly enjoying the experience. At the end of each performance he asks the audience to donate to a local charity as they leave, and grabs a bucket himself. As we left he was surrounded by a crowd of audience members who, as well as putting money in the bucket, were queueing up for selfies or autographs. I couldn’t help thinking that with just a couple of hours before he had to start again most people, let alone 79-year-olds, would be glad of a nice rest.

That’s never been his way though. He’s always been a hard worker. As well as acting on stage, film and TV, for many years he had another one man show, Acting Shakespeare, which he performed on and off from 1977 to 1990. I saw this one too, in London in 1987. Like the current show, he asked for a bit of audience participation, throwing out the names of Shakespeare adaptations and asking us which Shakespeare play they were derived from. Everybody knew West Side Story, but The Boys from Syracuse was a bit trickier. The main part of the performance, though, were the scenes from Shakespeare. Not just the big monlogues, he also included the balcony scene from Romeo and Juliet (rather unconvincing as Juliet I thought) and one of the scenes between Hal and Falstaff in Henry IV part one, which was mesmerising.

Now he has a much wider audience, who know him from a whole series of TV and film roles of which Gandalf in The Lord of the Rings is the best known, and lengthily acknowledged at the start of the show. So completely does he hold the audience in his hands that he’s able to close the first half with The Leaden Echo and the Golden Echo by the great but hardly mainstream Victorian poet Gerard Manley Hopkins. 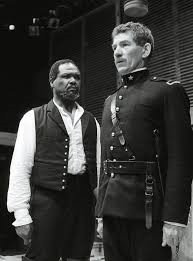 After the interval, it’s Shakespeare all the way. I’ve seen him perform quite a few Shakespeare roles on stage: Romeo, Macbeth, Coriolanus, King Lear, and Richard III on film, but the very best, for me, was his Iago at the old tin hut The Other Place, in 1989, with Willard White as Othello. The audience were so close in that space that they could see everything, and McKellen gave an astonishingly controlled performance, every flick of the eyes intended to be seen and interpreted by those watching.

Ian McKellen has long been known for campaigning, and during the show he mentions his work as a gay rights activist. He finishes this show with a different kind of political statement, the speech from Sir Thomas More which Shakespeare wrote and which exists, probably in Shakespeare’s own hand, in the British Library. It’s a plea for humanity when dealing with refugees. It’s a speech he’s become associated with: here’s a clip from a performance a few years ago.

For me, Ian McKellen was a magician long before he became Gandalf, and I would love to see this show again. The tour goes on until September and although most performances are sold out there’s always a chance. If you already have tickets, you’re in for a treat. If you haven’t, it’ll be worth the effort to get some. Here is Michael Billington’s review, and this article includes interviews with some of the actors he’s worked with. This current tour certainly doesn’t have the feel of a farewell, and I’m sure we’ll be hearing more from the great Ian McKellen in years to come. He’s performing on his birthday in Bolton, Lancashire, where his obsession with theatre began. It’s sure to be a special evening, so happy 80th birthday, Sir Ian!

This entry was posted in Shakespeare on Stage and tagged British Library, Gandalf, Ian McKellen, Ian McKellen on Stage, Lord of the Rings, Sir Thomas More. Bookmark the permalink.