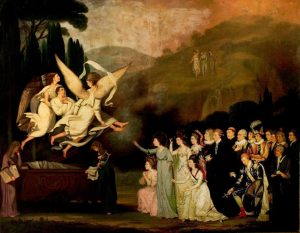 The 250th anniversary of the Garrick Jubilee has been celebrated in a number of ways in Stratford-upon-Avon during September 2019. Church bells have been rung, Morris dancers have performed, talks and exhibitions have been put on. There’s also a more lasting legacy. The Royal Shakespeare Company owns an extraordinary collection of Shakespeare-related paintings and for the anniversary they have restored the quirkiest of them, The Apotheosis of Garrick by artist George Carter, painted in 1782, and displayed it in the circle bar of the RST, at least for a while.

It’s a painting that needs an explanation. When it was painted after David Garrick’s death his face was universally known, both through his stage performances and the many paintings of him. But who are all the other people, and what’s going on? The RSC have placed some excellent information panels beneath it, and the following has been adapted from them. 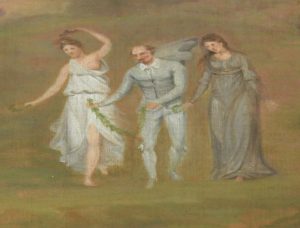 Shakespeare and the muses of comedy and tragedy, in The Apotheosis of Garrick

The setting is classical: Garrick is lifted to Mount Parnassus by angels where Shakespeare waits to greet him flanked by the muses of Comedy and Tragedy, all bearing laurel garlands. In the foreground his Drury Lane Company dressed as their favourite Shakespearean characters gather to bid him farewell.

From left to right, they are as follows. Kneeling at the front dressed in pink is Elizabeth Pope as Cordelia from King Lear. Next to her is Mary Anne Yates, leading tragedienne, as Isabella in Measure for Measure, arm outstretched. 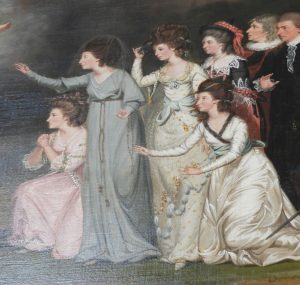 Some of the actors in The Apotheosis of Garrick

Fanny Abington is in silvery white as Beatrice in Much Ado About Nothing. Famous for her sense of fashion, she was painted by Sir Joshua Reynolds. Kneeling next to her is Elizabeth Hartley as Desdemona from Othello, whose beauty prompted a brawl in Vauxhall Gardens. Behind them, in the hat, is Jane Pope as Mistress Page in The Merry Wives of Windsor.

Robert Bensley or Roaring Bob is Prospero in The Tempest. William “Gentleman” Smith is Hamlet. He was educated at Eton and Cambridge and eloped with Elizabeth Hartley. John Hayman Packer often played old men and here he is Friar Laurence in Romeo and Juliet.

Richard Yates, hand on chest, is Malvolio from Twelfth Night. As a theatre manager he set up the New Theatre in Birmingham in 1773. John Palmer or Plausible Jack kneels with his sword and shield as Iachimo in Cymbeline. He was a theatre doorkeeper before becoming an actor. Behind him is another actor in Cymbeline, Thomas Hall, feather in cap, as Pisanio. 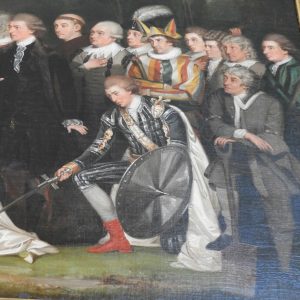 Actors in The Apotheosis of Garrick

The most obvious is Thomas King, in motley as Touchstone in As You Like It. A Drury Lane favourite, he performed over 100 roles during a long career. Next are Joseph Vernon as Thurio in The Two Gentlemen of Verona and Robert Baddeley as Dr Caius in The Merry Wives of Windsor.

The last little group are John Moody as Old Adam in As You Like It, then William Parsons leaning on his spade as the Gravedigger in Hamlet. Finally William Brereton is Orlando in As You Like It.

Though the painting doesn’t have a direct link to the Jubilee, there are connections.

Of these seventeen actors, more than half are recorded to have been either at the Stratford Jubilee or in its London staging. In Stratford, Thomas King took part in a staged interruption to Garrick’s address after the Ode on the second day, Mr and Mrs Yates attended the grand Masquerade, and William Smith was scheduled to walk in the procession. 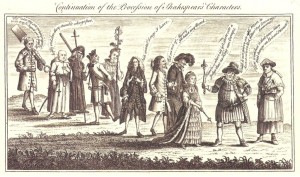 Continuation of the Procession of Shakespear’s Characters [London, 1769]. From the collections of the Lewis Walpole Library, Yale University.

As Garrick had arranged that his own company would process through the streets we can assume some of the others were there too, though as the procession had to be abandoned there are no written reports. The engravings of the procession (at least one prepared in advance) don’t give a good impression of how it would have been.

When the Jubilee was staged in London, Garrick again called on his leading actors. Several are named in reports including Mr Vernon, Mr King (as Touchstone), Mr Moody, Miss Pope, Mrs Abington and Mr Brereton. 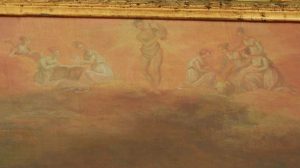 Apollo and the Muses from The Apotheosis of Garrick

Now restored and hung in a brightly-lit room the quality of the painting and its details can be seen. The classical references are much more obvious. At the top of Mount Parnassus, the home of poetry, music and learning, is Apollo, the sun god and the remaining seven muses, in the rosy glow of dawn. In the world of the painting, Shakespeare comes down the mountain with Thalia the muse of Comedy and Melpomene the muse of Tragedy to welcome David Garrick to take his rightful place. Apollo holds his lyre and several of the muses are with their identifying emblems. On the left Euterpe, muse of Music holds her flute, and Clio, muse of History, holds a large open book. On the right Urania, muse of Astronomy sits with her globe and compass.

There’s something rather wonderful about the fact that this eccentric, wacky painting is on display just yards away from the spot where David Garrick delivered his Jubilee Ode and in so doing laid the foundations for all the Shakespeare-worship that has taken place in Stratford-upon-Avon in the last 250 years.