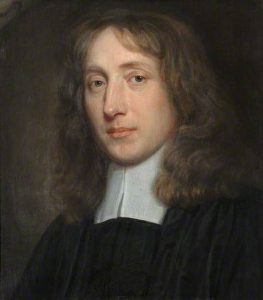 Over the last few weeks the hottest story in Shakespeare studies has been the identification of a First Folio in the Free Library of Philadelphia’s Rare Book Department as John Milton’s own copy, annotated in his own hand. The book had been in the Library for over 70 years, and Library staff had often put on display this volume with its interesting additions. It had been studied in depth by Professor Claire Bourne from Pennsylvania State University’s English Department who had narrowed the annotations down to the middle of the seventeenth century, and her article was read by Jason Scott-Warren from the University of Cambridge’s English Faculty. Bourne noted that the reader who had made the annotations made interesting comments, and the handwriting reminded Warren strongly of the poet John Milton. There is a detailed discussion of the palaeography here, and Jason Scott-Warren spoke to the BBC’s Front Row on 17 September 2019.

Milton was known to be an admirer of Shakespeare. He was born in London in 1608 where his father was a scrivener and composer living close to the Mermaid Tavern which was frequented by theatre people. Their lives overlap by just a few years so I suppose it’s just about possible that Milton might have met Shakespeare The first poem Milton wrote that appeared in print was “On Shakespeare”, included without attribution in Shakespeare’s Second Folio in 1632.  It would be many years before Paradise Lost but Milton was already writing about Shakespeare’s influence.

What needs my Shakespeare for his honoured bones,
The labor of an age in pilèd stones,
Or that his hallowed relics should be hid
Under a star-ypointing pyramid?
Dear son of Memory, great heir of fame,
What need’st thou such weak witness of thy name?
Thou in our wonder and astonishment
Hast built thyself a live-long monument.
For whilst to th’ shame of slow-endeavouring art,
Thy easy numbers flow, and that each heart
Hath from the leaves of thy unvalued book
Those Delphic lines with deep impression took,
Then thou, our fancy of itself bereaving,
Dost make us marble with too much conceiving;
And so sepúlchred in such pomp dost lie,
That kings for such a tomb would wish to die.

An addition in Milton’s hand: the prologue to Romeo and Juliet

Looking at the annotations Warren was able to see how Milton was reading Shakespeare as a writer. He suggested changes to the metre of a line, referenced sources, and examined how some of Shakespeare’s best speeches worked. It’s one of the most exciting literary discoveries in recent years, based on the work of two academics working thousands of miles apart, but able to share the images by the wonder of digitisation.

Many congratulations to both researchers who have made this great discovery. But, especially as it’s Libraries Week, let’s also take our hats off to the Librarians in Special Collections who make these rare items available to the public.

Caitlin Morgan, curator of the Free Library of Philadelphia’s Rare Book department, has written a lively post about the role of the Library, refuting the usual image of libraries as dusty places where fascinating items get hidden. In fact libraries are now places where information can be spread more speedily and effectively than ever through digitisation, cataloguing and the writing of blogs. This year Libraries Week is celebrating libraries in a digital world, and this is certainly appropriate for this story.