Everything to Everybody: opening up Birmingham’s Shakespeare Memorial Library 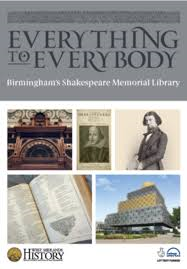 For years Libraries have been under severe pressure, with many closing their doors, having their opening hours restricted, or having to rely on volunteers. So it’s wonderful to report that one of the great Shakespeare libraries in the West Midlands, the Birmingham Shakespeare Library, is the subject of an aspirational new project that will unlock its treasures for everyone.

What’s particularly heartening about the project is the emphasis on culture in general, and Shakespeare in particular, as something for everyone. Shakespeare organisations already know this: the RSC alone brings Shakespeare to 500,000 young people every year, and cultivates a network of partner schools. And libraries have long argued that they offer far more than books, being valuable community resources, that can provide social cohesion and inspire civic pride. It’s refreshing to hear the democratic aims of Libraries being praised and rewarded. 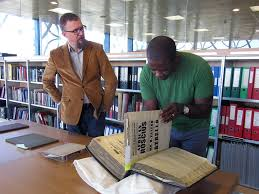 The name of the project comes from the founder of the Birmingham Shakespeare Library, George Dawson. He came to the rapidly-growing and dynamic town of Birmingham in 1844 and hoped to educate, and improve the lives of, all the people who lived and worked there. Actor Adrian Lester, project patron, quotes his words: ‘Everything to everybody,’ urged the Library’s visionary founder, George Dawson. What belongs to Britain, belongs to you. No obstacles, no gaps, no separation. It remains an inspiring and relevant challenge.

You’ll find everything you could wish to know in the beautifully-produced guide here.

There are also links from the History West Midlands site here.

If you’d like to see and hear Ewan Fernie talking about the project, click on the link to watch a lecture he gave recently.