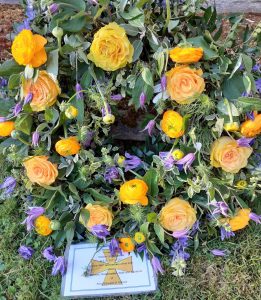 The nearest Saturday to Shakespeare’s Birthday has for several decades been the day on which the town of Stratford-upon-Avon holds its biggest celebrations of the year. Birthday Celebrations have been held in some for or another for around two hundred years. They’ve taken a lot of different forms over the years: marching bands, parades, banners, folk dancing, a posh dinner, speeches, flag-pulling, playing the National Anthem, dressing up in national costume or as Shakespeare’s characters and singing Happy Birthday. These and more have all been tried, as the organisers have attempted to find new ways of having a party in the streets, and people from all over the world attend. This year, 2020, the party planned for 25 April is cancelled. 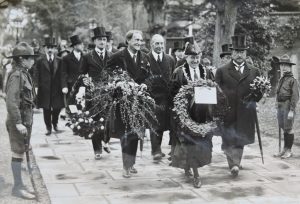 The Celebrations can be traced back to the founding of the town’s Shakespeare Club in 1824: just three years later the first procession of people dressed as Shakespeare’s characters anywhere in the world formed the core of their big event. The procession took three hours to wend its way around the town and was watched by thousands of people. In the 1890s King Edward VI School initiated the tradition of carrying flowers down to the Church to be placed on the grave. It proved so successful that it has become an essential part of the day’s proceedings. Even in these difficult days a beautiful wreath has been laid outside the church near the wall where Shakespeare’s monument stands, placed there by the headmaster of KES. Several other floral tributes were left at the church on 23rd April, including mine, a little bunch of rosemary and garden flowers

Today I’m posting a selection of photographs of Birthday Celebrations from the past. The photos are from a variety of sources: my own collection, the archive of the Shakespeare Club, the collection of Nicholas Fogg, and the Shakespeare Centre Library and Archive. I hope they will be enjoyed by everyone who’s self-isolating, looking forward to better times. 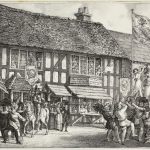 The Procession outside the Birthplace, 1830 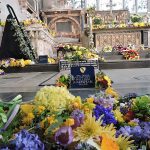 The grave decorated with flowers 2015 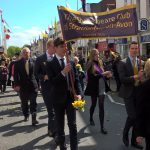 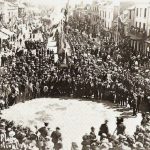 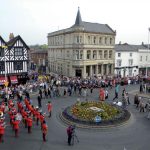 View of the top of Bridge Street 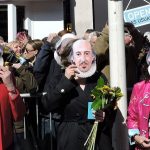 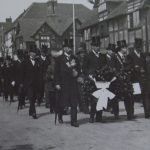 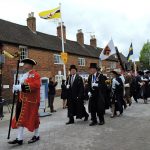 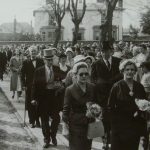 Dorothy Tutin was among the crowds in 1958 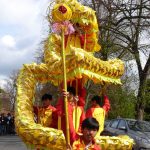 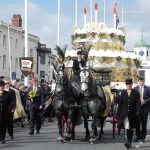 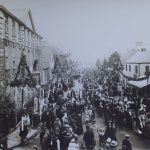 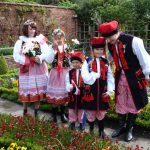 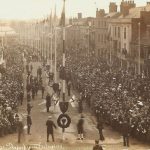 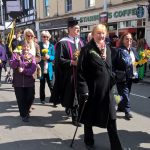 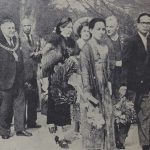 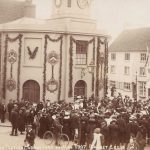 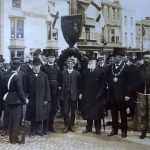 The Birthday became International in 1911 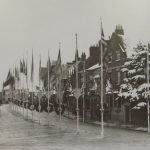