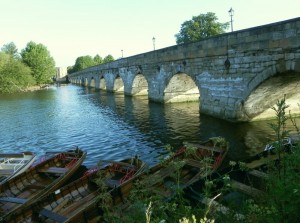 This is the first of a series I’m going to be posting weekly on the subject of the River Avon and its connections with Shakespeare.

Clopton Bridge was built about 100 years before Shakespeare’s time by Sir Hugh Clopton, a man with local connections who became a wealthy merchant and eventually Mayor of London. Back in Stratford he spent a great deal of money on various building projects, the most influential of which was this bridge.

It might not look very impressive to us, but this stone bridge made a huge difference to the town. The antiquarian John Leland, writing following a visit in 1530, described it as a “great and sumptuous bridge … with fourteen arches”.

The town already had a weekly market, where people came from the surrounding countryside to trade goods, but before this bridge was built there was only a wooden bridge which became impassable when the river Avon rose. Leland explains that “Afore the time of Hugh Clopton there was but a poor bridge of timber and no causey [causeway] to it, whereby many poor folks and other refused to come to Stratford when Avon was up, or coming thither stood in jeopardy of life”. This substantial bridge made it possible for the town to become a thriving commercial centre where people could come to buy and sell goods. It also encouraged small industries like John Shakespeare’s gloving business to thrive.

Travellers passing through would stay at one of the town’s many inns. Sometimes there would be more exotic visitors – during Shakespeare’s early years several professional acting companies on tour performed in Stratford. It’s even thought that this could be how Shakespeare got the theatre bug.

Far from being a rural backwater, it was a busy place where Shakespeare would have had the opportunity to observe many people whose lives were very different from his own. All these people were brought here by Hugh Clopton’s bridge, and when Shakespeare left Stratford to go to London to begin his career as an actor and writer, the first steps on his journey were made over this bridge.