The News of the World and Shakespeare’s Venice #NOTW 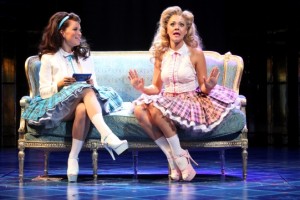 Emily Plumtree as Nerissa and Susannah Fielding as Portia, The Merchant of Venice 1011

On the evening the News of the World’s closure was announced, I went to Rupert Goold’s RSC production of The Merchant of Venice. During the interval a friend and I wondered which of Shakespeare’s plays was most relevant to the situation that had triggered this event. Measure for Measure, we agreed.

We went on to discuss the production. I wasn’t sure that the concept of “Destiny”, the game show in which Portia is both host and prize, was really working. “Just wait”, my friend advised, “there’s a payoff”.  By the end of the evening I felt I’d found Shakespeare’s angle on the whole News of the World story there in the production.

I rather like productions with a concept. I’ve seen The Comedy of Errors set on a Greek island, A Midsummer Night’s Dream populated by characters from children’s story books. I’ve seen The Tempest set in the heat of Africa and the cold of the Arctic. This last one was also directed by Rupert Goold, a man who never does a concept by halves.

In this latest production the concept comes near to overwhelming the play. There will be many people who will take one look at the photos, or read a summary, who’ll decide this production’s as shallow as the Las Vegas world it presents, and one to miss. I can understand people leaving at the interval, but I would say, as my friend did, “Just wait, there’s a payoff”.

After the interval nothing is quite so big, so garish. There are no more scenes where Portia and Nerissa perform for the cameras, then relax as soon as they are off. After Bassanio has chosen the correct casket and won his prize, it’s a shock to the audience as much as to Bassanio to see Portia revealing her real self by taking off her high heels and blonde wig. His reaction, predictably, is a let-down. 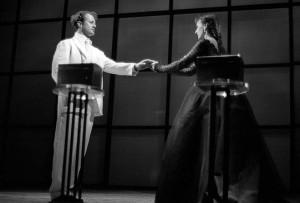 I expected this production to remind me strongly of that from 1993, where Venice was set in the contemporary world of the City of London, all computers and coffee shops, while Portia seemed to be stuck in a time-warp wearing long ball-gowns in a fairy-tale Belmont. The two worlds didn’t interact at all, and Penny Downie wasted no time in getting into a sharp suit and off to Venice.

This year the game-show and Venice occupy the same space, but Portia still seems keen to swap her frilly dresses for a suit. The contrast is the courtroom of Antonio’s trial, horrifically resonant of Guantanamo bay, of physical and mental torture, an underworld which most people never see. The trial of Milly Dowler’s murderer with its inhuman cross-examination of the victim’s parents, followed by the revelations of phone hacking by journalists on The News of the World, came strongly to mind.

Unable to unlock the briefcase containing the legal notes intended to save Antonio, Portia is thrown back on her own intelligence, and prowls the stage hoping for the inspiration which comes to her at the very last moment. The ring episode reinforces the feeling that her marriage to Bassanio, the prize for her as well as for him, will not be what she hopes.

The final image of Portia, desperately isolated, hobbling around the stage on one high heeled clear plastic shoe (a reference surely to Cinderella’s glass slipper), clutching her blonde wig, is deeply troubling.

Antonio is aware from the beginning of the play of the emptiness of his surroundings:

I hold the world but as the world, …

A stage, where every man must play a part,

And mine a sad one. 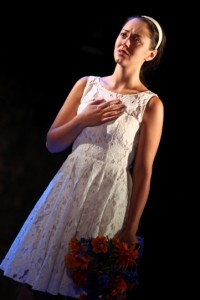 It takes the rest of the play for others to reach the same conclusion. Like contestants in a game show their expectations are thwarted and they are left with nothing but disappointment.

Goold’s production is a blistering critique of the ghastly, destructive business of celebrity culture promoted by The News of the World which destroys what it seems to celebrate. This production shifts the discussion away from anti-semitism towards the shallowness of the society inhabited by the whole play.

This entry was posted in Plays and Poems, Shakespeare on Stage and tagged News of the World, Portia, Royal Shakespeare Company, Rupert Goold, Shakespeare, Susannah Fielding, The Merchant of Venice. Bookmark the permalink.