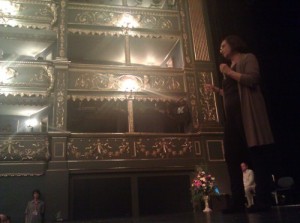 One of the plenary sessions taking place in Prague

The biggest meeting of Shakespeare scholars for five years is taking place in Prague this week, 17-22 July. The theme of the World Shakespeare Congress is Renaissance Shakespeare, Shakespeare renaissances, and the conference is undergoing its own renaissance as it explores the concept of making extracts of its proceedings available on the internet.

Video blogs include extracts from conventional lectures, workshops in action, interviews with speakers, and responses from people who have attended sessions.

As well as making those of us not able to get there feel involved, these blogs will also be useful for conference-goers as a way of catching up with some of the sessions they missed.

The International Shakespeare Association was founded in 1974 and since then there have been nine five-yearly conferences. Each one has been in a different venue; Washington, DC, Stratford-upon-Avon, Berlin, Tokyo, Los Angeles, Valencia, Brisbane and now Prague. The organisation is run from the Shakespeare Centre in Stratford-upon-Avon.

It’s probably routine for many subject areas, but I think it’s a first for a Shakespeare conference to use video blogging in this way. In previous years the complications of printing have meant that the only record of the conferences has been a collection of highlights, published some time after the event, so the video blogs will give a great sense of immediacy. The blogs also allow sessions which aren’t easy to record in print, like workshops, to be shared.

Lectures and seminars scheduled to take place during the week have included When Shakespeare Met Kafka, Asian Shakespeare and multicultural performance, and Shakespeare’s plays in print outside Britain and workshops on new ways of teaching Shakespeare,  Shakespeare without chairs, and the Cambridge World Shakespeare online project.

These conferences bring together many of the best minds working on Shakespeare and by the time of the next conference I’d love to see a full recording made available on the internet, which could then be a high quality resource for universities and interested groups to generate further discussions.

TV viewers and cinema goers are getting used to the idea that they can tweet or email questions during live debates and if in the future live streaming of sessions can be introduced this will be a way for people who are not at the conference to join in the conversation. At conferences the formal sessions are often the springboards to further informal discussions and being able to continue an exchange of opinion with an online group would enliven the conference for all.

On Thursday at 1.30 a session is timetabled entitled Putting a girdle round about the earth, to look at how the Shakespeare Birthplace Trust is using online resources to engage with people around the world. I’m sure they’ll be looking beyond what’s been achieved so far towards finding ways of increasing engagement between visitors and users and the staff and collections, whether actual or virtual, to increase knowledge of Shakespeare’s works, life and times.

With constantly changing technologies and expectations it will be fascinating to see how conferences develop by the time of the next World Shakespeare Congress in 2016.