The curse of Macbeth strikes again

Posted on September 4, 2011 by Sylvia Morris 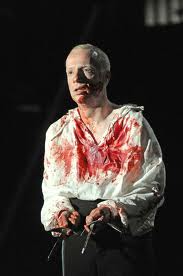 Poor Jonathan Slinger, the RSC’s current Macbeth, seems to be the latest casualty of the so-called “curse of Macbeth”. He didn’t acquire his broken arm during any of his dangerous onstage moves but, rather prosaically, by being knocked off his bike in the street.

Macbeth has been thought to be unlucky for centuries, perhaps ever since it was written. The spell cast by the weird sisters around their cauldron, conjuring ghostly apparitions and prophecies of Macbeth’s doomed future, is said to be genuine, and would have terrified superstitious members of Shakespeare’s audience.

Eye of newt and toe of frog,
Wool of bat and tongue of dog…
Double, double, toil and trouble;
Fire burn, and cauldron bubble…
Finger of birth-strangled babe
Ditch-deliver’d by a drab,
Make the gruel thick and slab…
Cool it with a baboon’s blood,
Then the charm is firm and good.

Ironically this part of the scene is omitted from the current production, the weird sisters being played by three children.

The play has frightened actors as well as audiences. When Sarah Siddons first read the play in preparation for playing Lady Macbeth she recorded her impressions in her diary:

I went on with tolerable composure in the silence of the night ‘til I came to the assassination scene. The horrors of the scene rose to such a degree that made it impossible to get further. I snatched up a candle and hurried out the room in a paroxysm of terror. My dress was of silk and the rustling of it, as I ascended the stairs to go to bed, seemed to my panic-stricken fancy like the movements of a spectres pursuing me. I capt my candlestick and threw myself on my bed where I lay without daring even to take my clothes off.

The play turned out to be lucky for Sarah Siddons. She held audiences spellbound in the role of Lady Macbeth, playing it for over 25 years right up to her farewell to the stage in 1812.

Some of the many mishaps blamed on the play are documented in Richard Huggett’s book The Curse of Macbeth. The Astor Place riot in New York in 1849 was said to be sparked off by the rivalry between Edwin Forrest, the leading American tragedian and English actor William Charles Macready, who were appearing in competing productions of Macbeth. A crowd 20,000 strong assembled, said to be organised by Forrest, and soldiers called in to control the riot mistakenly fired into the crowd killing 31 people.

There have been accidents during rehearsals. Laurence Olivier was preparing for the opening night at the Old Vic in 1937 when he lost his voice and was nearly killed by a heavy weight falling in the wings. Then Lillian Baylis, the theatre’s manager, died of a heart attack two days before the first performance.  In 1967 Peter Hall was directing Paul Scofield in the play when Hall collapsed with a severe attack of shingles. It was feared that he would lose his sight.

Many accidents have happened onstage, but is Macbeth really more prone to these than other plays? The stage is always a health and safety nightmare, though precautions are in place to make it as safe as possible. In the 1997 Hamlet, Susannah York fell off the stage late in rehearsals breaking a bone in her heel. Diana Quick replaced her at short notice and played the part for six weeks. Darrell D’Silva, the RSC’s most recent Antony in Antony and Cleopatra, had an accident which damaged his hand while handling a firearm in rehearsals.

It seems unlikely that any of these are attributable to a mention of Macbeth, but Jonathan Slinger’s accident isn’t going to dispel the longstanding reputation of “The Scottish Play”.

3 Responses to The curse of Macbeth strikes again