Posted on September 6, 2011 by Sylvia Morris 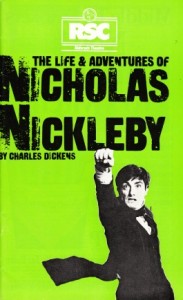 The Life and Adventures of Nicholas Nickleby, one of the most successful productions in the RSC’s history, has rightly been marked with an event in the RSC’s programme celebrating 50 years of outstanding theatremaking.

The adaptation of Charles Dickens’ comic novel opened in June 1980 at the Aldwych Theatre, initially for an eight-week run. The eight and a half hour two-part production became a sellout, playing for two more seasons at the Aldwych, then being filmed at the Old Vic before transferring to Broadway from September 1981-January 1982. The filmed version was shown as the first major drama broadcast on Channel 4. In 1985-6 the RSC revived the production with a new cast, performing it in Stratford-upon-Avon, Manchester, Newcastle-upon-Tyne, Los Angeles and Broadway and since then a shortened version has also been performed at Chichester. Information can be found on John Caird’s website.

I’d always loved Dickens as well as Shakespeare and found the combination irresistible. I went to the very first all-day performance, and saw each version at least twice, attending all three of the last nights at the Aldwych. On Sunday several of the original members of cast got together again: Christopher Benjamin, Suzanne Bertish, Janet Dale, Patrick Godfrey, Julie Peasgood, Edward Petherbridge, Emily Richard, Timothy Spall and David Threlfall, as well as co-director John Caird, adapter David Edgar and designer John Napier. A group of five musicians performed some of Stephen Oliver’s original music and the actors performed some scenes from the production interspersed with film clips and reminiscences.

This triumph was born out of near-disaster. John Caird explained how the RSC was faced with a drastic cut in Arts Council funding at the end of 1979. Instead of putting on two or three new productions inLondonin 1980 Trevor Nunn decided to put all the company’s available resources into one spectacular production. They may have been short of money, but they weren’t short of talented actors who were already used to working together and other creative people happy to improvise. The rehearsal period began in November in Stratford with a five-week workshop period. Each actor précised a chapter of the book, and researched an aspect of Victorian life. Only at the end of this period were parts allocated.

David Edgar had been commissioned to adapt the novel. He was impressed early on by the way that all the complex interweaving plots of the novel echoed each other, stories of dysfunctional families all driven by money. He was able to add some interweaving of his own: rehearsals for the Crummles theatrical company’s production of Romeo and Juliet were cross-cut with real dramas. Juliet’s distress at being cast off by her parents when she refused to marry their choice of suitor was alternated with scenes showing Kate Nickleby’s helplessness at being pursued by the sinister Sir Mulberry Hawk (played memorably by the late Bob Peck). Smike, cast as the Apothecary in Romeo and Juliet, heartbreakingly repeated his line “Who calls so loud”, when dying in Nicholas’s arms. 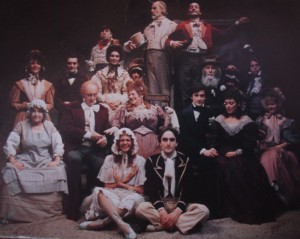 Dickens was a writer with a real social conscience, but no real political views. His opinion has often been quoted as “if men would behave decently the world would be decent”. The production’s success relied in great measure on the choice of Roger Rees to play Nicholas, a bit of a prig in Dickens’ book. James Fenton wrote “I can think of few actors who are better at conveying, through facial expressions alone, a frank acquaintance with grief. It was a good move to cast such an engaging actor in the part of young Nickleby…because a striking character was required to add savour to the original”

The play generated a fantastic hoax. Using forged headed notepaper a press release was sent out and letters were written to the company explaining that as a result of the success of Nicholas Nickleby the Royal Shakespeare Company was to be renamed the Royal Dickens Company. Several people were taken in by the scam, discovered to be the work of director Ken Campell.

Some of the initial reviews were disappointingly luke-warm. Michael Billington’s Guardian review was read out, followed by two letters written in response, one of which was my own. Word of mouth ensured the play’s success, helped by Bernard Levin’s review several weeks later which left no-one in any doubt that he thought the show

So richly joyous, so immoderately rife with pleasure, drama, and entertainment, so life-enhancing, yea-saying and fecund…  – so Dickensian.

The evening ended with the “Farewell” song. In a lovely spontaneous touch David Threlfall, (Smike), invited Julie Peasgood, (The Infant Phenomenon) to dance, followed by the rest of the people on stage, treating the audience to the unexpected sight of David Edgar waltzing with Timothy Spall.

A number of clips are on YouTube. This one is from a documentary with, about 3 minutes in, a live recording of the scene where Fanny Squeers invites Nicholas to tea.

This clip is the same scene as filmed without a live audience, including the wonderful game of cards.