Celebrating Shakespeare as a symbol of Britishness 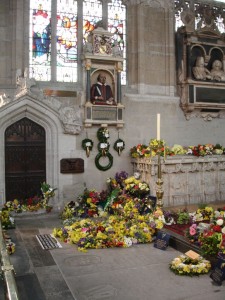 In a recent survey, William Shakespeare came out top when people were asked to choose which symbol of Britishness they were most proud of. The Demos thinktank’s report A Place for Pride found that 75% of people agreed that “I am proud of William Shakespeare as a symbol of Britain”, compared with other symbols such as the Union Jack, the royal family, the pound and the National Health Service.

These results are probably no surprise, but I do think it’s odd that, given how popular Shakespeare is both in this country and across the world, that there is no national Shakespeare day. Is he so omnipresent that we don’t need one?

Ironically the local newspapers in Stratford have been able to report the findings from Demos cheek by jowl with another report documenting disagreements between local organisations about how Shakespeare’s Birthday should be celebrated in the town. For many years, in fact for almost two centuries, Shakespeare’s Birthday has been celebrated by local people. The origins seem to be lost in time, but the story goes that the tradition was started by the boys of Shakespeare’s school who, on April 23rd, walked down to Holy Trinity Church where Shakespeare is buried, carrying flowers to leave on his grave. This charming tradition began somewhere in the middle of the nineteenth century, around the same time as the 1824 foundation of the Stratford Shakespeare Club which commemorated the day with a celebration dinner or performance. This was before the founding of the Shakespeare Birthplace Trust or the Shakespeare Memorial Theatre, both of which took on roles in the celebrations, the theatre putting on a Birthday Play right from its opening in 1879.

As time went by the celebrations became more elaborate: from 1896 the American Ambassador was invited to take part, gradually leading to the flags of all the nations being unfurled by representatives of their countries. A lunch, with speeches, is a tradition that dates right back, including since 1990 the award of a silver bowl for outstanding services to Shakespeare, funded by local jewellers’ Pragnells. This award has been given to actors, directors and academics including Dame Judi Dench, Sir Peter Hall and Professor Stanley Wells, CBE. For many years the main celebrations have taken place on the nearest Saturday to the 23rd April, a special Shakespeare service being given at Holy Trinity Church on the following morning.

Over the years many peripheral events have been added: local children performed folk dances, and local acting companies have performed extracts from Shakespeare’s plays around the town. In recent years there have been even more attempts to make the day inclusive, and perhaps the current problems are caused by the celebrations trying to do too much. 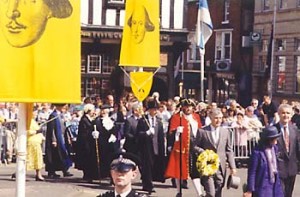 According to reports, the part of the celebrations that seemed most at risk was the parade itself, which it was suggested would be downgraded to the Sunday, while the lunch and the family events would continue to take place on the Saturday. For me the parade is the heart and soul of the Birthday celebrations. Not only does it predate the other activities, it’s the part which has most to do with Shakespeare and his relationship with the town, mapping his journey from cradle to grave via the site of the house where he died, and the school where he received his education, where the schoolboys, referencing the fact that they started the idea, join the procession, leading it down to the church.

Earlier this year the Daily Telegraph called it the “people’s parade” because of its inclusiveness, and suggested it was a great British ritual which everyone should experience at least once. Fortunately the issues seem now to have been resolved by a reorganisation of responsibilities. 2012 should be extra special, with a Shakespeare festival planned for much of the year both in Stratford and around the country.

The traditional parade will take place as normal on Saturday 21 April 2012. If you’ve never been before, put the date in your diary, and on the day bring a modest bunch of flowers, and come along to enjoy the day. A sprig of rosemary in the lapel completes the picture and is a reminder of what the day’s about:

2 Responses to Celebrating Shakespeare as a symbol of Britishness