One of many books written about Shakespeare's history plays

It’s always claimed that Shakespeare must have been fascinated by British history because he wrote so many plays about it. I make the play count thirteen. But was this fascination with the history itself, or did he see it as a source for stories which he went on to turn into plays?

In Andrew Marr’s Start the Week this week on Radio 4, he took the subject of the representation of history in books, in particular its relationship with fiction. His guests included Boris Johnson, who has just published a book on the history of London, and Alison Weir. It was fascinating to hear how these authors approach the writing of fiction as opposed to fact, though I couldn’t help thinking that Alison Weir protested too much about how readers confuse the two. She’s written factual biographies and novels about the same person, as in her biography of Eleanor of Acquitaine and a novel based on her life called The Captive Queen, so it’s hardly surprising that readers get them mixed up.

Shakespeare was limited in the resources he could use, and often relied on one or two source books. Liz Dollimore is currently writing a series of blogs about the sources for Shakespeare’s plays and has just posted one about King John, in which Holinshed’s Chronicles are used as the unmistakeable source for part of the plot. 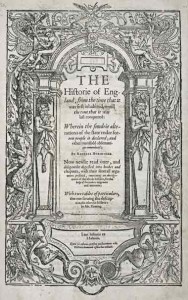 The title page to the 1587 edition of Holinshed's Chronicles

The boundaries between fact and fiction are always fuzzy to say the least, and if Holinshed gets the facts wrong, then Shakespeare will repeat the error. The murderous figure of Richard III with his hunch back was not invented by Shakespeare. He was merely repeating the Tudor myth that the last of the Plantagenet kings was evil through and through, and the Richard III Society and other advocates of the real Richard know they are fighting a losing battle against one of Shakespeare’s most compelling villains and best stories.

In his introduction to the now rather elderly Penguin edition of Henry IV Part 1, P H Davison comments on “the difference between Elizabethan and modern conceptions of the use of history”. History was thought to be educational, but not by teaching lists of dates: “By holding up a mirror to the past it was thought possible to learn how to amend one’s own life and how to anticipate events”. He goes on to explain how Shakespeare’s perceived political conservatism can be seen as a result of his, and of his countrymen’s fear of the consequences of rebellion and disorder, though we’re now much more aware of the subversive elements in Shakespeare’s writing.

In the two parts of Henry IV, Shakespeare juggles material from a large number of sources, giving any modern editor the difficult job of disentangling them. Some elements of the plays are straightforwardly from source books like Holinshed, some are from earlier plays. The Famous Victories of Henry the Fifth covers Prince Hal’s “pranks” as well as his conversion on the death of his father, and it’s thought that there may have been an earlier play on the same subject. Then some of the evidence for Hal’s wildness comes from accounts that were circulating during his lifetime, so it’s likely there is some truth in them. The story that Prince Hal boxed the Lord Chief Justice on the ears appears in one of the early plays written before Shakespeare’s, but Shakespeare tones it down by having Falstaff merely refer to it in passing.

Falstaff himself is one of Shakespeare’s great inventions, as are the scenes in Gloucestershire. These scenes have a purpose in the structure of the play, comic relief between the serious political scenes, but also serve to remind the audience of the truly national significance of the accession of the new king, with repercussions felt as far away as Justice Shallow’s peaceful orchard in Gloucestershire.

In Henry IV Part 2 Shakespeare was also setting the scene for what he knew would be his great story of national celebration in Henry V. The awareness of history is everywhere in the play, but especially in Henry’s speech before Agincourt.

Then shall our names,
Familiar in his mouth as household words,
Harry the King, Bedford and Exeter,
Warwick and Talbot, Salisbury and Gloucester,
Be in their flowing cups freshly remembered.
This story shall the good man teach his son,
And Crispin Crispian shall ne’er go by
From this day to the ending of the world
But we in it shall be remembered.

Holinshed’s Chronicles report what King Henry really said to his troops before this battle, and Shakespeare pretty much ignored it to write his own incomparable speech. Samuel Johnson wrote “no good story is ever wholly true”, and thankfully Shakespeare always went for the story.

5 Responses to Facts, fiction and Shakespeare’s view of history