The facts about Shakespeare’s coat of arms 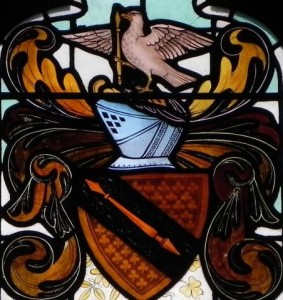 At some time in the late 1560s or early 1570s William’s father John Shakespeare enquired about acquiring a coat of arms for his family. John had ambition: as a young man he left the little village of Snitterfield for the nearby town of Stratford-upon-Avon, setting up in business and taking part in local government. He married the heiress-daughter of landowner Robert Arden, from a well-known family of minor gentry. That coat of arms would have given his family added respectability and status.  Just as we don’t know exactly when he made the enquiry, we don’t know why John didn’t pursue this claim: perhaps it was the expense, at a time when his previously successful business was beginning to falter.

In order to get a coat of arms, an application had to be made to the wonderfully medieval-sounding College of Arms, grants being made by several men known as Heralds. Coats of arms were ceremonial rather than practical, though they took the form of a shield and the grant conveyed the right to bear a sword. The College of Arms still exists and continues to approve coats of arms to this day. 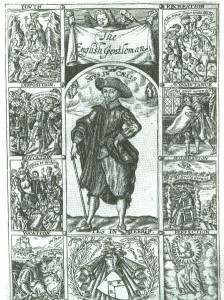 The title page of Richard Brathwait's 1630 book The English Gentleman, features an idealised portrait of a gentleman

In Elizabethan England more and more people were becoming wealthy through trade and commerce, and hankered after the respectability which a coat of arms could give.

Coats of arms were expensive, costing between £10 and £30. As a comparison the schoolmaster in Stratford-upon-Avon was paid a salary of £20 a year.  Money alone didn’t guarantee success though; you had to prove that you or one of your ancestors deserved the honour.

In October 1596, the Shakespeare claim was renewed. John, the head of the family, was elderly by this time but his eldest son was a successful actor, poet and playwright in London and it’s thought that he revived the claim on behalf of his father. He was successful and three years later another claim was made, to quarter the Shakespeare arms with those of Arden (this involves dividing the shield in two so that it contains both coats of arms) linking the Shakespeares with the older family.

The story takes another twist when in 1602, after John Shakespeare had died and William was the head of the family, one of the Heralds checked the grants of arms that had been made in the previous few years and claimed that twenty-three had been made to “base persons”, accusing his fellow Herald of corruption. Shakespeare was one of these singled out, as “Shakespeare ye player”. Acting was not a suitable occupation for a gentleman.

The Herald who had made the original grant, backed up by William Camden, the most senior of the Heralds, upheld the Shakespeare claim citing John Shakespeare’s experience as Bailiff of Stratford-upon-Avon and the military service said to have been done by Shakespeare’s great-grandfather in the days of Henry VII.

So how do we know these details are true?

There are five documents that confirm this story: two drafts dated 20 October 1595, the document outlining the suggested quartering of the arms, the complaint made in 1602, and the refutal of it. Several bits of evidence are missing: the original document in which John Shakespeare set out his claim, the fair copy of the coat of arms, and the grant of arms isn’t set out in the register. In fact you might say we don’t know the grant was actually made because we don’t have the document that says so, but none of the later documents would exist if it hadn’t.

Shakespeare used the grant made to his family. Shakespeare is called “Gent”, or “Gentleman” in several legal documents, he left his ceremonial sword to young Thomas Combe in his will, and the coat of arms is displayed on the Shakespeare monument in Holy Trinity Church. In the poems dedicated to Shakespeare in the First Folio he is several times referred to as “gentle”, though the word could refer to behaviour as well as status.

In one of the greatest speeches ever written, Henry V rouses his soldiers with the thought that fighting with him will make them all gentlemen:

We few, we happy few, we band of brothers.
For he today that sheds his blood with me
Shall be my brother; be he ne’er so vile,
This day shall gentle his condition.
And gentlemen in England now abed
Shall think themselves accursed they were not here,
And hold their manhoods cheap whiles any speaks
That fought with us upon St Crispin’s day.

In my next post I’ll look in more detail at the Shakespeare coat of arms and its uses.

This entry was posted in Shakespeare's World and tagged coat of arms, College of Arms, Gentleman, Henry V, herald, Shakespeare. Bookmark the permalink.

One Response to The facts about Shakespeare’s coat of arms