Is Hamlet a callous, egocentric villain? 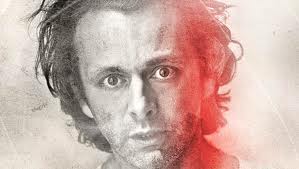 According to author John Updike, “Hamlet is in fact the callous, egocentric villain of Hamlet”. This view was recently quoted in a posting on the Shakespeare Bulletin board SHAKSPER.

That’s quite a condemnation of probably the most famous of all fictional characters, and certainly Shakespeare’s best-loved hero.

He’s what makes the play so endlessly fascinating for both actors and audiences. We can all identify with elements of the complex and contradictory character Shakespeare created. Hamlet may be callous and egocentric, but aren’t we all, sometimes? 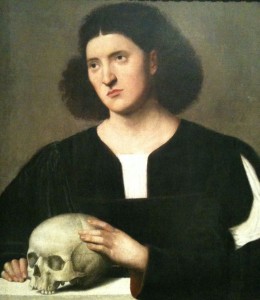 Portrait of a young man with a skull, by Bernardino Licinio

This painting, from around 1515, shows a beautiful and soulful young man contemplating a skull, signifying death. It was painted by a Venetian painter, and now hangs in the Ashmolean Museum,Oxford. We’d all, probably including John Updike, prefer this renaissance image of poetic melancholy. The Hamlet Shakespeare gives us, though, is full of contradictions. To him, man is both “the beauty of the world; the paragon of animals” and the “quintessence of dust”.

Although there are Italianate elements in the play, not least the reference to The Murder of Gonzago: “the story is extant, and written in very choice Italian”, the story of Hamlet comes from northern Europe. The Danish author Saxo Grammaticus gathered together many Icelandic and Norse sagas to create his history of Denmark, Historiae Danicae, in around 1200.  One of these contains the story of Hamlet. Almost all the elements of Shakespeare’s play exist in this tale, but the Hamlet figure, Amleth, is more violent and bloodthirsty. The story is less subtle than Shakespeare’s: the murder of Hamlet’s father is not a secret needing a ghost to reveal it, Polonius’s murder is horribly grisly, and the story ends with Amleth setting fire to the palace, burning everyone inside to death.

Other plays on the subject were written and performed before Shakespeare’s, and though none have survived it seems likely that they introduced at least some of the changes from Saxo that Shakespeare went on to include. The resulting plot is then a blend of elements from this rough and brutal story with subtler details from earlier plays and Shakespeare’s own additions.

Actors playing this role always have to perform a delicate balancing act between these extremes. In the current production at the Young Vic the audience is prepared for the play to be set in a psychiatric hospital. From the first moment Michael Sheen’s wild-eyed Hamlet appears, taking his father’s greatcoat from his coffin and clutching it to his chest, they know not to expect him to be “The glass of fashion and the mould of form” that Ophelia later speaks about. 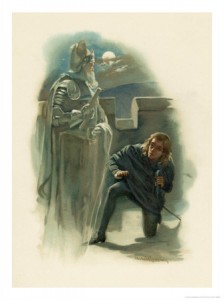 Hamlet and the Ghost of his dead father

One of the most exciting scenes in the production is that in which Hamlet becomes the ghost of his dead father, his voice becoming deep and resonant, wearing his military greatcoat. Jonathan Pryce famously also spoke the ghost’s words when he played the prince, but he was possessed by the spirit of his father, Exorcist-style, whereas Sheen seems to adopt his father’s physical being.

It’s possible for the Ghost to almost take over the early part of the play, so powerful are his appearances. There is an old story that Shakespeare performed the part of the Ghost for himself, and many actors would relish speaking these terrific lines:

I could a tale unfold whose lightest word
Would harrow up thy soul, freeze thy young blood,
Make thy two eyes like stars start from their spheres,
Thy knotted and combined locks to part,
And each particular hair to stand on end,
Like quills upon the fretful porpentine.

This serious production has an outstanding central performance from Sheen, and some other great moments, but I wondered if the audience might be preoccupied by trying to make sense of the setting.  The focus, as ever, is Hamlet himself, and I doubt if many people in the audience would agree that he’s the villain of the piece.

I’ve found a couple of interesting views by actors who have played the role with distinction. Here Simon Russell Beale talks about playing the part, and here Sam West demonstrates different ways of performing “To be or not to be”.

While writing this post, I heard that on Tuesday 6 December at 4.30 on Radio 4, Michael Sheen will be celebrating the Great Life of science fiction author Philip K Dick whose writings inspired his Hamlet. With a repeat on Friday 11pm, don’t miss it!

9 Responses to Is Hamlet a callous, egocentric villain?