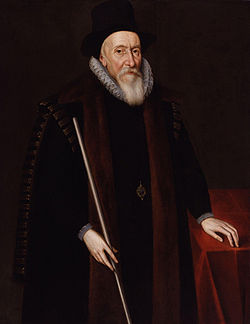 Among the beautiful Tudor portraits at the National Portrait Gallery is this one of a dignified elder stateman, Thomas Sackville, painted around 1601 by J de Critz the Elder. The label, as well as detailing his role in government, mentions that he was one of the authors of the play Gorboduc.

How could this serious-looking politician have written a play, even a tragedy? I’d never read Gorboduc, though I knew it to be an important pre-Shakespearean play.

Sackville was born in 1536. His father was an MP and Privy Councillor, and cousin of Anne Boleyn, Queen Elizabeth’s mother. Thomas himself was admitted to the Inner Temple in 1554, and took the degree of Barrister. He was elected to the House of Commons in January 1558 and remained in Parliament after the accession of Elizabeth 1.

By 1560 he was known as a poet, and Gorboduc, co-written with Thomas Norton, also of the Inner Temple, was performed for their Christmas revels in 1561-2 under the auspices of Robert Dudley, followed by performance at court in January 1562. Here’s an essay about the play by the archivist of the Inner Temple.

It’s the first play in English written in blank verse. The plot begins when Gorboduc, King of Britain, divides his kingdom in two, assigning half to each son, Ferrex and Porrex.  The younger son kills the elder, then the mother revenges him by killing the younger brother. The people rise in rebellion and kill both King and Queen, and the nobility, after putting down the rebels, argue among themselves and civil war follows.

This serious academic piece of work, written by men with legal backgrounds, warns of the potential results for England should Elizabeth die without a clear successor. The similarities with the opening scenes of King Lear are obvious. In one scene the king and his counsellors discuss the division of the kingdom. Three of them, Arostus, Philander and Eubulus make long speeches asking the King to reconsider.
To part your realm unto my lords your sons
I think not good for you, nor yet for them,
But worst of all for this our native land.
Within one land one single rule is best:
Divided reigns do make divided hearts

There’s more than a hint of the Henry VI plays here, and in the speech by Eubulus at the end of the play he summarises the “thousand mischiefs” resulting from civil war:
One kinsman shall bereave another’s life;
The father shall unwitting slay the son;
The son shall slay the sire, and know it not.

Eubulus places the blame for the disintegration of the country squarely on the monarch who does not make succession clear.
This doth grow when, lo, unto the prince
Whom death or sudden hap of life bereaves
No certain heir remains – such certain heir
As not all-only is the rightful heir
But to the realm is so made known to be,
And truth thereby vested in subjects hearts

This appeal to Elizabeth to marry could hardly be more direct. 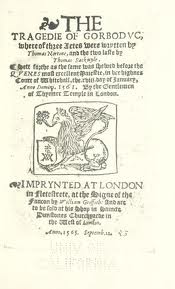 The five-act play is classical in style, all action is reported. Each act is preceded by a dumb show which a chorus relates to the play as a whole at the end of the act. The dumb shows are the most theatrical parts of the otherwise static play.

The first summarised the argument of the whole play. Six wild men came on stage carrying a bundle of sticks which they tried and failed to break. Then the sticks were plucked out of the bundle and easily broken individually. “Hereby was signified that a state knit in unity doth continue strong against all force, but being divided is easily destroyed”.

This sophisticated allegorical scene worked quite differently from the dumb show in Hamlet, which sets out the action of the play that followed.  We don’t know if Shakespeare ever saw Gorboduc, but it seems likely he read it as it was published in 1565 and 1570. Click here to read an account of Shakespeare’s debt to it.

The Queen’s reaction to the play is not recorded, and though it didn’t persuade her to marry it did no harm to Sackville’s career. He was a well-respected poet, Edmund Spenser dedicating a verse to him “Whose learned Muse hath writ her own record, In golden verse, worthy immortal fame”. At the age of 30 he abandoned writing poetry for serious politics, and by the 1580s he had become one of Elizabeth’s closest advisers, succeeding Burghley as Lord Treasurer in 1599.

Elizabeth left the question of her succession unsettled until just before her death, forty years after Gorboduc was performed. Sackville was one of the people who helped to ensure the smooth transition of power to James 1, and was appointed Lord Treasurer for life by the new king. The painting shows him in this important role. He died suddenly at the council table on 19 April 1608 after over forty years of service.