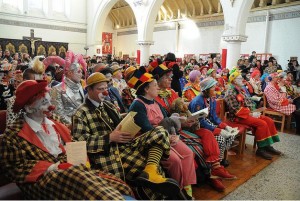 At 3pm on Sunday 5 February the greatest clown in the history of England, Joseph Grimaldi will be remembered at the annual Clowns Service which takes place at Holy Trinity Church, Dalston, London. Here’s a link to the Flickr page.

This celebration comes only two days before the bicentenary of the birth of Charles Dickens, one of the greatest novelists who ever lived. It’s rarely remembered that as well as his novels and periodicals, Dickens also put his name to a biography of Joseph Grimaldi. After Grimaldi’s death in 1837 Thomas Egerton Wilks was employed to “re-write, revise and correct” his memoirs, but later in the year the publishers gave the job instead to the up and coming writer of The Pickwick Papers, Charles Dickens. Dickens was already writing Oliver Twist, and was given only two months to finish the job. Inevitably, Dickens contributed little new work to the resulting book, the least successful work that ever went out under his name.

While this has done little harm to Dickens reputation, it did not allow justice to be done to Grimaldi. He was born in 1778 into a theatrical family, and made his first stage appearance aged only 2. He became a brilliant performer: 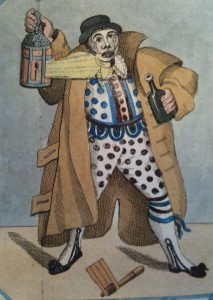 Grimaldi as the Watchman

“He was a master of grimace; and whether he was robbing a pieman, opening an oyster, affecting the polite, riding a giant cart-horse, imitating a sweep, grasping a red-hot poker, devouring a pudding, picking a pocket, beating a watchman, …or nursing a child, he was so extravagantly natural, that…neither the wise, the proud, the fair, the young, nor the old, were ashamed to laugh till tears coursed down their cheeks at Joe and his comicalities”.

His personal life, though, read like a script for a melodrama. He was abused by his father, saw his first wife die in childbirth when he was 21, his son from his second marriage drank himself to death, and his own health was ruined by the physical demands of his acrobatic clowning. When he retired in 1827 he was almost destitute, but still loved for his modesty.

Dickens was only 15 when Grimaldi retired so can hardly be blamed for having little direct knowledge of his work. But I think you can see echoes of the great clown in Dickens’ work. The comic description of Mr Wopsle’s Hamlet in Great Expectations may owe something to the story about a performance of the play recounted by, but not involving, Grimaldi. And in the same book Dickens’ description of Joe Gargery, way out of his comfort zone in Pip’s genteel London rooms, reminds me of the physical mime for which Grimaldi was famous. Grimaldi could be serious, and it has been said that his success as a clown was in part due to him being a good actor. Dickens voiced the popular view, that “the genuine droll, the grimacing, filching, irresistible clown, left the stage with Grimaldi, and though often heard of, has never been seen since”.

What then is the link with Shakespeare? Findlater, in his book on Grimaldi, asks why this superbly talented performer never performed in Shakespeare apart from one performance of the Second Gravedigger in Hamlet. His friend Charles Dibdin wrote a drama featuring a Wild Man, representing the power music had on the savage mind. It was a great success for Grimaldi, and suggests he would have been a great Caliban.

There may also be a clue in the advice Hamlet gives to the players:
Let those that play your clowns speak no more than is set down for them. For there be of them that will…set on some quantity of barren spectators to laugh too, though in the meantime some necessary question of the play be then to be considered”.

Perhaps straight actors like Kemble were not prepared to take the risk of being upstaged by an ad-libbing, grimacing clown. A more concrete link is to the holdings of the RSC’s Library kept at the Shakespeare Centre Library and Archive. Here are two scrapbooks containing images, articles, newspaper reviews and original documents about Joseph Grimaldi, including one letter written by him not long before his death. The books were put together by his family, and presented to the theatre by Alexander B Grimaldi. It seems appropriate that these books, witnessing that Grimaldi, like Shakespeare, was the greatest in his field, should be kept with records relating Shakespeare himself.

An anonymous writer wrote:
To those who never saw him, description is fruitless; to those who have, no praise comes up to their appreciation of him. We therefore shake our heads with other old boys, and say: “Ah! you should have seen Grimaldi”.

One Response to Clowning around: Charles Dickens, Joseph Grimaldi and Shakespeare