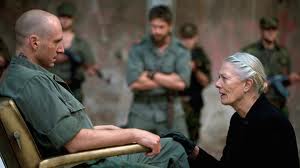 Ralph Fiennes’ Coriolanus is an extraordinary achievement. Not only is it Fiennes’ first attempt at directing a film, but he also takes the leading role, in effect directing himself too. He’s breaking new ground: it’s the first feature film version of Coriolanus, which although admired, is rarely studied, and could never be called a crowd-pleaser. But Fiennes has struggled long and hard to get this film made because it’s a play which he believes has much to say to young audiences.

Fiennes certainly does not aim at conventional Shakespeare-lovers. The time is today, the place somewhere inEastern Europe. There’s no sign of the elegant classical world of ancientRome. Characters find out about news through the TV, removing the need for description, and hand-held cameras dodge around the dangerous city streets.

I’ve been taking a look at the shooting script for the film, introduced by John Logan, the writer of the screenplay. His motivation is to bring new audiences to Shakespeare. The character of Coriolanus himself shares many features with the heroes of action movies and computer games: he’s violent, arrogant and cold. The screenplay describes him as “a man of steel”. Fiennes inhabits this character magnificently. He isn’t quite the physical powerhouse of most action movies, but it’s mental strength that’s important. 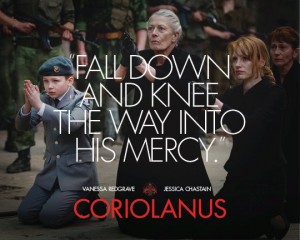 The film doesn’t neglect the emotional heart of the play, a scene where Shakespeare’s writing is simple and intense. Coriolanus’s mother, wife and son come to him to plead with him not to invade and destroyRome. Coriolanus has been impervious to all requests for mercy up to this point. Fiennes has sensitively matched Shakespeare’s spareness by keeping the camera still for this scene and filming it very simply. The film includes all of Shakespeare’s words, and here’s the climax of the scene from the screenplay:

Volumnia:  This fellow had a Volscian to his mother;
His wife is in Corioles and his child
Like him by chance… Yet give us our dispatch.
I am hushed until our city be afire,
And then I’ll speak a little.
She turns and begins to go.
But…
We finally see Coriolanus crack.
Like a great building crumbling.
Like fissures cutting across marble.
Emotion floods into him.
He lunges forward and grabs her hand. Volumnia stops.
Coriolanus: O, mother, mother!
What have you done?
He falls to his knees, clutching her hand.
Coriolanus: Behold, the heavens do ope,
The gods look down – , and this unnatural scene
They laugh at.
He buries his head in her, like a lost child:
Coriolanus: O my mother, mother! O!
You have won a happy victory to Rome;
But for your son – believe it, O, believe it!
Most dangerously you have with him prevailed…
(he looks up at her deeply)
If not most mortal to him.
She looks down at him. His meaning, his foreshadowing, is clear; she has saved Rome, but he knows he is doomed. Rome will live. He will die. This is the price for her victory today.
She is willing to pay that price. So is he.
A moment between them.
He accepts his destiny.
Coriolanus: But let it come.

For me, Fiennes didn’t quite manage the emotional breakdown described in the script, but he makes a fine stab at it. It’s interesting that John Logan uses such poetic language to describe the scene and Coriolanus’s feelings.

Much has been written recently about the benefit or harm of modernised versions of Shakespeare. It seems to me this shooting script would make a good basis for the study of the play together with the film itself and Shakespeare’s own text.

It is a film that’s true to Shakespeare, true to our times and a significant debut for a fledgling director.