At the end of Friday afternoon, a new publication, Teaching Shakespeare, is to be launched at the British Shakespeare Association’s conference at Lancaster University. This pilot issue is being published both on paper and online, and after the conference will be available on the BSA’s website. It’s designed to help all those involved in teaching Shakespeare, especially at school level. In order to provide a forum for discussion and a place for announcements and questions a new blog Shakespeare in Education: the BSA Education Network is also being announced which will become active shortly. I’ve been setting up this new blog and am delighted to be involved with this strand of BSA activity.

The new publication and the blog will, it’s hoped, see some lively sharing of ideas on the subject of making Shakespeare come alive for students of all ages.

This conference includes a particularly strong schools strand. On Friday the programme features a local schools’ open rehearsal of Romeo and Juliet before the launch of the new publication and all weekend there will be a whole series of workshops and panels focussed on teaching and on childrens’ engagement with Shakespeare. 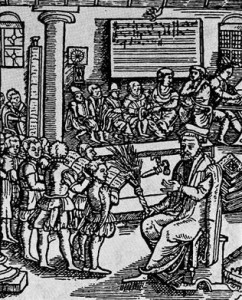 On Friday afternoon the panel on Shakespeare and Children includes consideration of the role of the child actor, on the way in which children speak in early modern plays, and on the boys’ company Edward’s Boys. On Saturday the stress on education will continue with a panel on Teaching Shakespeare inside out which will include papers on the use of contemporary works of art to assist the teaching of Shakespeare, blogs and wikis as learning tools, and the use of television adaptations in education.

The paper on Edwards’ Boys will be given by Perry Mills, from Shakespeare’s own school, King Edward VI in Stratford-upon-Avon. He will be sharing some of his experiences staging a selection of the repertoire of Early Modern childrens’ companies using only boy actors. He began this project in 2003, exploring how boys play female roles in a series of extracts from Shakespeare and Jonson. Then he and the new company began to focus on plays written explicitly for boys’ companies by dramatists including Lyly, Marston, Middleton, Dekker and Webster. These productions bring to life rarely-staged plays, and have offered valuable glimpses into the dynamics of an all-boy company. According to Professor John Jowett of  the Shakespeare Institute “the company is… the only stable group of players in the world consisting entirely of boy actors”. 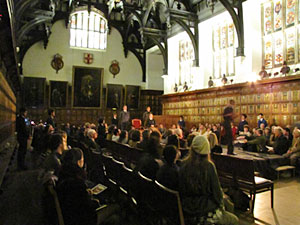 The KES boys do a great job, with lashings of relish (and admirable diction) they throw themselves into the action, having a particularly good time ripping out the evil Duke Piero’s tongue. In the lofty hall of Middle Temple under its magnificent double hammer beam roof, Marston’s anarchic gore-fest seems to suit the crepuscular gloom.

It’s not hard to see how the novelty of these boy companies found huge popularity in the early 1600’s. Rosencrantz tells Hamlet of ‘an eyrie of children, little eyases, that cry out on the top of question and are most tyrannically clapp’d for’t’. This ‘late innovation’ caused some concern among the profession, ‘berattled’ the common stages, and caused much ‘throwing about of brains’. Ben Jonson is said to have liked writing for them because he knew they would not argue back and change his script, or improvise around it.

It’s sure to be an interesting paper on a subject that is often discussed, but rarely explored.