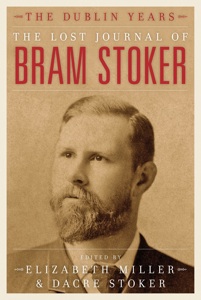 2012 marks the centenary of the death of Bram Stoker. At the time of his death on 20 April 1912 he would probably have seen the years he spent in London, theatrical manager to the great Shakespearian actor Henry Irving, as the height of his public career. He began his career as a journalist in Dublin, and continued to write during the 30 years he lived in London. He could never have guessed that his name would become famous for one of his eighteen novels, Dracula, while the careers of Henry Irving and Ellen Terry, both hugely famous actors in their time would be if not forgotten, hardly mainstream. So it is with that most ephemeral of art forms, theatre.

But Dracula, published in 1897, has inspired countless other films, plays and books, and in the last few years vampirism has become cool again. No wonder the centenary of the death of the man who started it all is going to be celebrated so extensively.

By coincidence, last year an early diary of Bram Stoker’s was found on the Isle of Wight, and this is to be published during March under the title The Lost Journal of Bram Stoker; the Dublin Years.

An international conference is being hosted by the University of  Hull’s Department of English and School of Arts and New Media in association with the Centre for Victorian Studies over 3 days from 12-14 April. Entitled Bram Stoker and Gothic Transformations the conference will focus on the gothic genre, including Dracula and vampirism. Part of the conference will take place in Grimsby, acknowledging that a section of the book is set in the town. 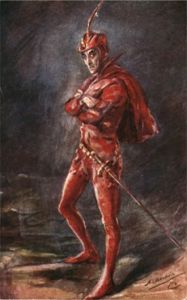 Irving as Mephistopheles in Faust

The Shakespeare link will be celebrated by a conference and dinner to be held in Stratford-upon-Avon on 14 and 15 April. The figure of Dracula was in part inspired by Henry Irving’s acting, in particular his portrayal of Mephistopheles in the successful play Faust. Irving’s major Shakespeare roles included Hamlet, Benedick, Macbeth, Richard III, Shylock, Malvolio, Cardinal Wolsey and King Lear. A major collection of material collected by Bram Stoker relating to Irving’s over twenty years’ tenure of the Lyceum Theatre is kept at the Shakespeare Centre Library and Archive in Stratford-upon-Avon.

In London on 21 April, a symposium entitled Open Graves, Open Minds, is to be held at Keats House.

There will be a major public conference on 5-6 July at Trinity College Dublin, where Stoker studied. It will be followed by a presentation at the National Library of Ireland on 7 July. The main aim of the conference will be to try to expand the critical focus away from an exclusive obsession with Dracula and take account of the full extent of Stoker’s writing, from his other Gothic novels, The Lair of the White Worm and The Snake’s Pass, to his short stories and journalism. It will also consider Stoker’s relationship to late nineteenth-century Ireland and especially Dublin, and address his status as an ‘Irish’ writer of substance. 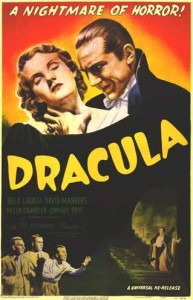 Dracula was made popular by the 1931 film starring Bela Lugosi, and the world of film will also be celebrating. Hammer Films, who made nine Dracula films, are planning a revival with a new Dracula film. And Stoker has already been honoured with special showings at the Oporto film festival in Portugal 25 Feb-6 March

Regular readers of this blog may have had difficulty with the link to the BSA Education blog in the last post. The link should now be working so do revisit the post and click on the link.

2 Responses to Bram Stoker’s centenary and the Shakespeare connection