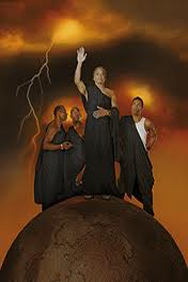 In this year of firsts, Greg Doran, who’s about to take over the running of the Royal Shakespeare Company, is creating a few firsts of his own. He’s currently rehearsing the first RSC Shakespeare production featuring a completely black cast. The play will be set in modern Africa, another first. And for the first time the company is recording a filmed version of the play at the same time as rehearsing the stage production. Here’s a link to the RSC rehearsal photographs.

This is what Greg Doran has to say about the play:
One of the inspirations behind setting Julius Caesar in Africa was discovering the Robben Island Shakespeare and that Nelson Mandela had chosen to autograph lines from the play, asserting that it spoke in a particular way to his continent. It also struck me that there must be some reason why Julius Nyerere, the first president of Tanzania, had translated the play into Swahili. The actor John Kani put it most succinctly when he told me that Julius Caesar was quite simply “Shakespeare’s Africa play”.

If you consider the history of the Continent since Independence over the last fifty or sixty years, it has witnessed a series of freedom fighters turned democratically elected Presidents, turned despotic rulers, who have pulled all the power to themselves in one party States. The fear of that tyranny has led to multiple military coups, assassinations and civil wars which continue to ravage the continent. Caesar could be Amin or Bokassa, Mobutu or Mugabe. 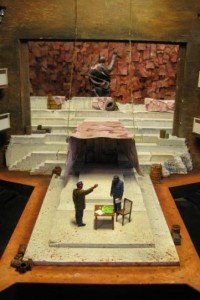 The set model for the 2012 RSC production

My first instinct was to set the play in a non-specific setting sometime in the last half century, definitely sub-Saharan – but of course History overtakes us. One of the urgent questions arising from the Arab Spring last year, was not would they get rid of Gaddafi, but what would replace him. This makes the second half of Julius Caesar, instead of frequently feeling a bit on an anticlimax, suddenly seem urgent and thrilling. Or that is what I hope will happen.

Greg Doran and Trevor Macdonald talk about this and Nelson Mandela in a Radio 4 Midweek programme, still available to listen to. His section begins 12.5 minutes in.

This statement, and much else about this project, is contained in several posts on the terrific Illuminations blog written by John Wyver who’s been involved in filming several of Greg’s productions in the past.

The Robben Island Shakespeare, which Greg mentions, was brought to this country in 2006 as part of the Complete Works Exhibition hosted by the Shakespeare Birthplace Trust which took place at Nash’s House in Stratford-upon-Avon. Robben Island, off the coast of South Africa, was where political prisoners were imprisoned, some for decades, during the apartheid era. 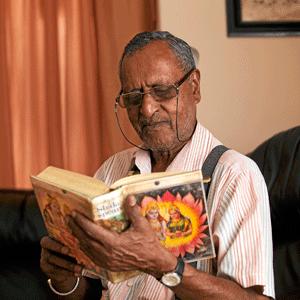 At the opening ceremony, in this beautiful house with the wisteria just outside the window in full bloom, we listened as the book’s owner, Sonny Venkatrathnam told us its the story. He explained how he smuggled the book into the prison and the guilt he continued to feel over lying to his guards by telling them it was his Hindu bible. Over a period of several years this ordinary volume of Shakespeare’s Complete Works circulated among the prisoners in the notorious jail, providing spiritual nourishment, and before Sonny’s release each man marked his favourite passage. After the official opening  I remember Greg’s partner, Tony Sher, himself a South African, saying that it was, for him, the most important object in the exhibition. Here’s a link to a recent article about the book, including an interview with Sonny himself.

Thirty-two passages are marked as favourites in the book:  Billy Nair marked Caliban’s  lines in The Tempest  which begin “This island’s mine”, and Walter Sisulu Shylock’s speech in The Merchant of Venice which includes “for sufferance is the badge of all our tribe”. 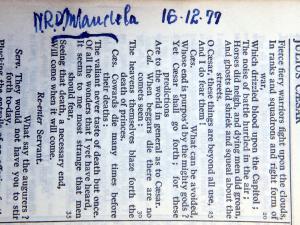 Nelson Mandela, though, picked telling lines from Julius Caesar:
Cowards die many times before their deaths:
The valiant never taste of death but once.
Of all the wonders that I yet have heard,
It seems to me most strange that men
Should fear…
Seeing that death, a necessary end,
Will come when it will come. 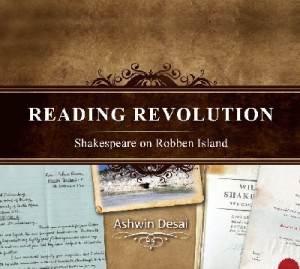 This year, too, a new book by Ashwin Desai, called Reading revolution: Shakespeare on Robben Island has been published. He’s interviewed many of the people who signed, not all of whom were members of the African National Congress. Within the prison many books were circulated that prompted political discussion among inmates, who acknowledged their differences to promote the aim of national unity. At the heart of Desai’s book is the view that “Reading changes our lives, and our lives change our reading”, Shakespeare being a vital part of this transformation.

On 7.45 on 3rd July another spinoff from this remarkable book reaches the stage, when Matthew Hahn’s play The Robben Island Bible will be performed as part of the London Literary Festival’s Africa Utopia Series, at London’s Southbank Centre.

Finally, the Robben Island Shakespeare is to be displayed as part of the British Museum’s Shakespeare: Staging the World Exhibition and the final programme in Neil MacGregor’s Radio 4 series on 11 May will feature it.

This humble little book speaks to us about Shakespeare’s importance in not just his, but our restless world, and I for one can’t wait to see how the African context  for the new RSC production of Julius Caesar will illuminate this 400-year old play.