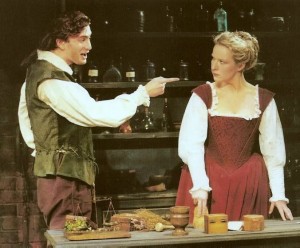 May 26 is the anniversary of the baptism of Shakespeare’s first daughter, Susanna. The only fact that most people know about her is that she was conceived before her parents were married. From this slender fact has led much speculation about the marriage of the 18-year old William to the older Anne Hathaway. Was it a “shotgun” wedding in which the unwilling groom was forced to marry a woman he didn’t really love, and was this the reason why he left Stratford?

Whatever the background, it’s impossible to feel that Shakespeare didn’t love his daughter. Fathers and daughters feature over and over again in loving relationships though they always have their ups and downs: Prospero and Miranda, Lear and Cordelia, for instance. When Prospero and Miranda were banished, the little girl was her father’s comfort:
A cherubin
Thou wast that did preserve me. Thou didst smile,
Infused with a fortitude from heaven.

And he’s overwhelmingly protective of her. “I have done nothing but in care of thee, of thee my dear one, thee my daughter”.

Susanna married a man Shakespeare must have approved of, a well-known physician John Hall, respectable and several years older than her. She gave birth to a daughter, Elizabeth. Little else is known of her life. She appears in a 1606 list of recusants for failing to receive Communion of Easter Sunday and in 1613 brought a suit for defamation against John Lane, a local man, who had slandered her by claiming she “had been naught with Rafe Smith”, that is she had committed adultery with him. The court took Susanna’s side. 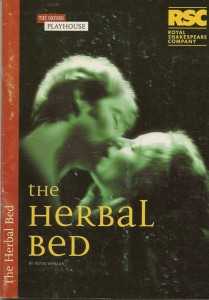 This episode was turned into a compelling play by Peter Whelan as The Herbal Bed, written for the RSC and performed by them between 1996 and 1998 in Stratford, London and on tour. The original production featured the then little-known David Tennant as Susanna’s accuser Jack Lane (ie John) and Joseph Fiennes as her would-be lover Rafe Smith, alongside Teresa Banham as Susanna. It has since frequently restaged by many other companies.

Susanna and John Hall were executors of Shakespeare’s will, and she inherited most of his property. Like her father, Susanna was buried in the chancel of Holy Trinity Church, in 1649. Her gravestone contains the following epitaph, which says something about her character and her closeness to her father.
Witty above her sexe, but that’s not all
Wise to salvation was good Mistris Hall,
Something of Shakespeare was in that, but this
Wholy of him with whom she’s now in blisse.
Then, Passenger, hast nere a teare,
To weepe with her that wept with all,
That wept, yet set her self to chere
Them up with comforts cordiall.
Her love shall live, her mercy spread,
When thou has’t ner’e a tear to shed.