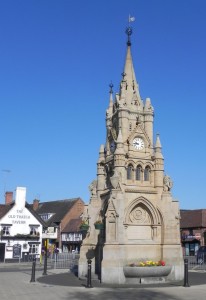 The American Fountain is a favourite focal point in the town’s marketplace, and its creation brought together an unlikely mixture of people. It was intended as a tribute to Queen Victoria, whose Golden Jubilee was being celebrated, to Shakespeare, and to the relationship between the USA and England. The fountain is heavily decorated with quotations and sculptural details which enforce these messages.

But where did the fountain come from? It was the gift of the American newspaper publisher and philanthropist George Childs. He was born in 1829 and rapidly became wealthy, co-purchasing the loss-making newspaper The Philadelphia Public Ledger and turning it into a hugely profitable enterprise. He had a deep love of Englandand its writers, erecting windows in memory of William Cowper, George Herbert and John Milton, and a monument to the great critic Leigh Hunt.

Stratford was not short of monuments: the Shakespeare Memorial Theatre had been completed in 1879, and there were already at least three statues of Shakespeare in the town. A different sort of monument was required. 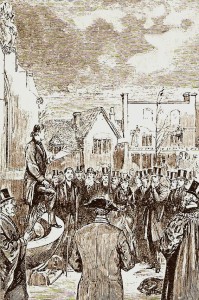 The unveiling by Henry Irving

The Foundation stone was laid on 20 June 1887, by Lady Hodgson, wife of the town’s mayor. Builders and sculptors must have worked swiftly as it was unveiled on 17 October, less than four months later, by the renowned actor Henry Irving. Irving was the best-known actor of his day, who had also successfully toured several of his Shakespeare productions to the USA.

The fountain and clock-tower is Victorian gothic in style. It includes two quotes from Shakespeare, one celebrating the drinking of water, “Honest water, which ne’er left man i’the mire”, from Timon of Athens, and the other, several lines from Henry VIII, which praise the reign of Elizabeth 1, but which are here applicable to Victoria, England’s other long-reigning female monarch:
In her days every man shall eat in safety
Under his own vine what he plants, and sing
The merry song of peace to all his neighbours.
God shall be truely known, and those about her
From her shall read the perfect ways of honour
And by those claim their greatness not by blood.. 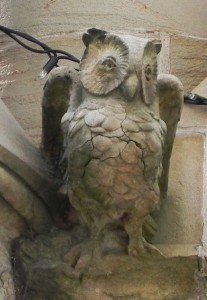 It contains many lovely details such as floral roundels, tudor roses, grotesque imps and my favourite, an owl.

The fountain also contains a quotation in praise of Shakespeare from the distinguished American writer Washington Irving. “Ten thousand honours and blessings on the bard
who has gilded the dull realities of life with innocent illusions”. And prominently on each corner are English lions and American eagles, each holding their country’s heraldic shields.

Horse-troughs, now filled with flowers, stand on each side, and the fountain no longer provides water. After restoration a few years ago, though, the clock works and its bell gently chimes. 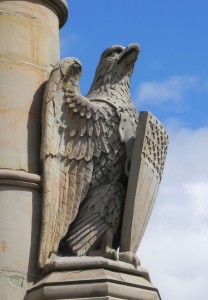 I’ve often wondered whether the water fountain was meant to be a rebuke to the drinkers of the town and in particular the local brewers, the Flower family. Stratford was renowned for its many public houses, and the popular temperance movement must have had a difficult time rallying support here. Flowers beer was famous, and the brewery was a major employer. The family were also local philanthropists, having funded much of the theatre themselves (it was known as the theatre built on beer).

In 1889 the church’s vicar, the Reverend Arbuthnot, published a short guide to the town, entitled Two Hours in Stratford-on-Avon. He mentions the water fountain, recording “our poet’s praise of cold water”, and suggesting “we shall do better to drink of it, rather than to patronise any of the Public Houses which abound in the town”. On market days the market place would have been particularly busy for the pubs. 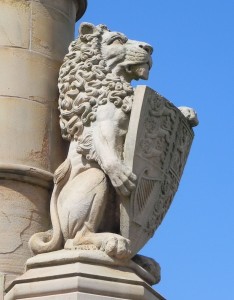 Henry Irving, although not involved with the temperance movement, helped to promote the respectability of the stage by his own charitably giving and moderate way of life. He was so successful in this that in later life he was the first actor to be honoured with a knighthood.

George Childs’s gift helped to strengthen links with America, where Shakespeare has been and continues to be admired and honoured.

2 Responses to Stratford’s American Fountain: a monument to temperance?