The Olympics are still weeks away but we’re already awash with sporting events. Football’s Euro2012 is still in full swing, and today the nation’s annual two-week love affair with tennis, strawberries and cream begins at Wimbledon.

Tennis and football are both ball games that have been played for centuries, but they’ve always attracted very different players.  John Stow’s Survey of London dates back to Shakespeare’s time, and among popular games in the city: “the ball is used by noblemen and gentlemen in tennis courts, and by people of meaner sort in the open fields and streets”. 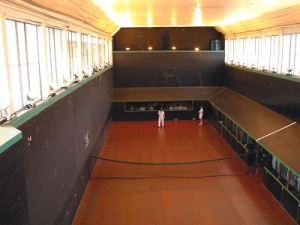 Henry VIII played what is now called “real” tennis on an indoor court at his palace at Hampton Court. The court was remodelled by Charles II in the late 1600s, and still exists. Lawn Tennis didn’t get going until the end of the eighteenth century and the game as we now play it became popular in the Victorian period.

In Shakespeare, tennis players are usually courtiers like Laertes, at the French court in Paris, or the French Dauphin who insultingly sends tennis balls to Henry V (the game originated in France). Henry’s reply shows Shakespeare’s familiarity with the game’s terminology:
When we have matched our rackets to these balls
We will in France by God’s grace play a set
Shall strike his father’s crown into the hazard. 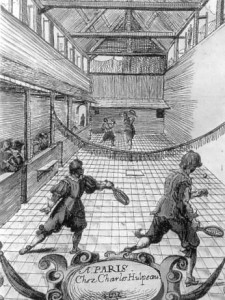 In his 1570 book The Scholemaster Roger Ascham suggests that tennis, like running, dancing and swimming, is “not only comely and decent, but also very necessary, for a courtly gentleman to use”.  Another educator, Richard Mulcaster, wrote a book on education in which he asserts the health benefits of exercise. “The racketers in tennis play… must show themselves nimble without straining”. Tennis “is very good for the arms…is a great furtherer to strength; it quickeneth the eyes… it helpeth the ridgebone [spine] by stooping, bending and coursing about”.

Football, however, has always been different, and kicking a ball around, particularly before there were fixed rules for the game, was rough and ready. In The Comedy of Errors the servant Dromio complains of his treatment by his masters:
Am I so round with you as you with me,
That like a football you do spurn me thus?
You spurn me hence, and he spurns me hither:
If I last in this service, you must case me in leather. 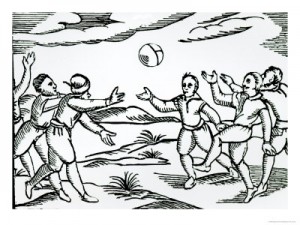 Richard Mulcaster was the headmaster of two major London schools, and his 1581 book Positions… for the Training up of children, which has already been quoted, contains his thoughts about the importance of exercise for his pupils: the humanist ideal of a healthy mind in a healthy body. He acknowledges the popularity of football and defends it, particularly when played under the control of a referee, and with a small number of players, when “the football strengtheneth and brawneth the whole body”. But he agrees with Stubbes that it’s necessary to guard against the game becoming rowdy. “It is now commonly used, with the thronging of a rude multitude, with bursting of shins and breaking of legs”.

Overstating his case just a tad, Stubbes blames football for every evil you can think of: “envy, malice, rancour, choler, hatred, displeasure, enmity and what not else: and sometimes fighting, brawling, contention, quarrel picking, murder, homicide and great effusion of blood, as experience daily teacheth.”

Now just bear that in mind next time you watch or take part in a football match.

With England having been put out of Euro2012 yesterday and little hope of much success in Wimbledon, if you want to see Brits doing well before the Olympics you might be better advised to watch the cycling Tour de France. Now there’s a sport which Shakespeare really wouldn’t have recognised!